In today’s gospel story, Jesus feeds the five thousand who, he says, are like sheep without a shepherd, that is, they are lost and aimlessly wandering around in a desert – a desert that is as much within them as it is the place where they are gathered. St. Mark tells us that they come to Jesus with the same kind of faith demonstrated by the woman with the flow of blood (whose story we discussed a few weeks ago). They believe, like she did, that if they only touch the hem of his cloak, they will be healed. They know that Jesus is the source of their healing, their wholeness of life, and they want to be made whole, to be delivered from their despair. 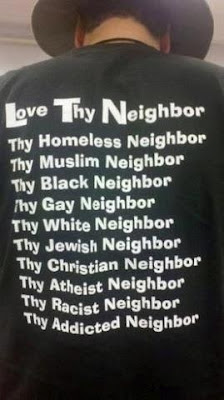 Being healed, being made whole again, is a choice all of us can make anytime. What’s in the way? Well, some of us as, we discussed last Sunday, believe the lie that we are too unworthy to be healed. What it takes then is for someone to welcome us as a friend, someone who will tell us the Good News of God in Christ that we are all forgiven, accepted, and loved by God.

Bur living in this truth, living in the Good News of God in Christ means giving up our judgments and our excuses and allowing ourselves to be guided by God alone, who anoints our heads with oil and consecrates us as holy. It means being the temples of God’s Holy Spirit that we are by means of our Baptism. It means answering our Baptismal call to proclaim by word and deed the good news of God in Christ. That means we don’t seek the kind of justice that satisfies us but the kind of justice that satisfies God, whose mercy and goodness follow all of us all the days of our lives.

In our Baptism we also promise to seek and serve Christ in all people, loving our neighbors as ourselves. We are the bearers of the grace of God to the world. As hard as it is sometimes, we forgive our enemies and pray for those who persecute us. We love one another as God loves us – and by one another, I don’t just mean our friends and family (who can be challenging enough at times), but all of our neighbors: the poor, the homeless, the addicted, los inmigrantes (immigrants), even the criminals here in Cleveland County where we’ve been planted. It means loving neighbors like the 24 year old shooter in Aurora, CO, who killed a dozen people and injured 58 more, or the suicide-bomber in Bulgaria who killed a busload of vacationing Israeli youths and their chaperones.

Following news of the mass shooting in Colorado I saw lots of postings on Facebook and Twitter about people praying for the victims, their families, and those affected by these tragedies - which is a good thing. But by Friday afternoon, I hadn’t seen a single one, even from the Episcopal Church, that offered prayers for the broken soul who committed these crimes. So I replied to a tweet by Episcopal Relief and Development calling for prayer for the Colorado shooter and his family. Their reply to me: “Absolutely - perhaps most of all. But for the grace of God, there go all of us.”

Living in the truth of the Good News of God in Christ is hard. It’s often easier and there’s infinitely more overt support for us if we live our lives according to the story told by society or culture rather than by the Christian narrative.

In our current cultural narrative, there is the saying: “You can’t be too skinny or too rich.” Being both of those makes you acceptable, approved of, and worthy. Even if it kills you – which it often does.

Please find the sermon illustration in your bulletins (bloggers, see this at the end of the blog) and notice the way beauty was depicted in art from the Renaissance period. I’ve given you two of the most famous images from that time: The Mona Lisa by Leonardo DaVinci, and The Three Graces by Botticelli.

These women would be considered fat and unattractive by today’s standard of female physical beauty which you can see illustrated on the back side of that handout.

Unfortunately, exile from the ranks of the acceptable and the approved happens to even the most beautiful and the richest among us. Diana, Princess of Wales, suffered from bulimia and self-mutilation, and she had this to say about it: “I had bulimia for a number of years. And that's like a secret disease. You inflict it upon yourself because your self-esteem is at a low ebb, and you don't think you're worthy or valuable. You fill your stomach up four or five times a day… and it gives you a feeling of comfort. It's like having a pair of arms around you, but it's… temporary. Then you're disgusted at the bloatedness of your stomach, and then you bring it all up again. And it's a repetitive pattern, which is very destructive to yourself." (Source)

“You don’t think you’re worthy or valuable” she said. The most photographed and admired woman of her time didn’t feel worthy or valuable. Why? I think because she was looking in the wrong place - both for her value and for her comfort.

It’s sad, because what she needed, what we all need, is already within us. We have this mistaken notion that if we go into the presence of God, we’ll feel like a worm.
We won’t. In the presence of God we feel only love from God and the hugeness of that love heals the worminess the world and our own inner chatter make us feel.

We are temples of the Holy Spirit. THE SPIRIT OF GOD, who created us just as we are and loves us that way, LIVES IN US.

When society or we ourselves exile us into the ranks of the unacceptable and the unapproved, we need only go into prayer, into the presence of God to find comfort and remember our value in the sight of God.

As for those whom society exiles, the letter to the Ephesians resets our thinking on that. “But now in Christ Jesus you who once were far off have been brought near by the blood of Christ. For he is our peace; in his flesh he has made both groups into one and has broken down the dividing wall, that is, the hostility between us.” (v 13-16)

We are the presence of Christ in our world today. We are called to live the truth of the Good News of God in Christ, no matter the cost (and there is a cost), and to share the Christian narrative with all those who are wandering aimlessly in the deserts of their despair.

We’re called to receive into our love and into our family ALL whom God sends us. In our presence, EVERYONE should feel valued, accepted, and forgiven.

Here is what our Scripture says to all who are exiled and excluded: “So then you are no longer strangers and aliens, but you are citizens with the saints and also members of the household of God, built upon the foundation of the apostles and prophets, with Christ Jesus himself as the cornerstone. In him the whole structure is joined together and grows into a holy temple in the Lord; in whom you also are built together spiritually into a dwelling place for God.” (Eph 19-21)

May The Episcopal Church of the Redeemer continue to be built together spiritually into such a holy temple. Amen.