Merry Christmas. I'm not really sure why we say "Merry Christmas" in church, except that we say it in culture. And so it may be important that we understand how those two things intersect where we live, when we live and why we live. 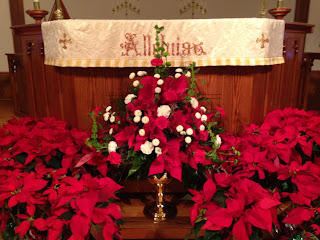 So we know this story from Luke. It is probably, of the Gospels, the most familiar story of the birth of the Savior. But I want to remind us that Luke was a Gentile; he was not a Jew. And he wrote this story from a perspective beyond that which existed where Jesus and his followers were living and breathing and having their ministry.

So Luke describes a moment in time in the world where Heaven and Earth intersect, and it's frightening. Those who were experiencing this shift were afraid, terrified it said. So the angel said "Don't be afraid because this is good news." And in that moment when Jesus was born, the divine and the human became one.

It was the beginning of the very thing we continue right now. We continue the work of God who made humanity and divinity one in Jesus Christ, left that spirit with us and said "Continue to move in this direction so that all that is human may becomes divine." In the Orthodox Church, they called it "theosis", us becoming divine, more and more like Christ. Not that we have to be God; we won't be God, we'll be human. But we can be filled with the Spirit of God and be more like Christ than like the world.

When we're afraid in our present time, we need to notice that heaven is trying to reach down and tell us it's okay. There's good news; the Savior is here. The Savior is right here, is in us right now.

You know what we're called to do? Open. Experience that moment where the Divine and the earthly become one. The mystics call that a unitive moment. Unitive: everything is one. There is no separation between God and creation, there's no separation between us and one another, or between us and God. We have this moment where everything fits. All time makes sense. We don't even have to think it, thoughts are too fast for our minds to grasp, but we know in our body what that feels like, and the Angel says it: it's peace.

That doesn't mean that we don't have any concerns. The concerns of the world are there for us to notice. They're supposed to shake us up on the inside and draw from us a compassionate response, a response like Christ had, the kind he showed us.

The peace we're talking about isn't an absence of stress, or an absence of problems, or an absence of worry. In fact, it's those things present, and underneath them, a peace that knows that in this problem and in this person and in this moment which is dark and difficult, there is light that shines, and guess who's holding that light? We are. And Christ asks us to go into those places of darkness that exist in the world and shine that light unafraid, unafraid.

I watched a movie recently called "Home." Have y'all seen it? it's an animated movie (I love animated movies). Rhianna plays the little girl's voice, and Jim Parsons plays the little alien. Have you seen it? The story is about this little alien who is part of a race who runs every time they're afraid, and they're afraid because someone is chasing them, and they don't why.

But anytime they encounter something that causes fear, the entire race of aliens runs. They get off the whole planet, they go and find another planet. Until something finds them again, and they realize they're afraid and they go to another planet until they find Earth. Earth becomes the planet they live in.

The little girl, played by Rhianna's voice, does exactly the opposite. Any time she's afraid, she goes to the thing that makes her afraid and uses it. The aliens don't understand, the aliens thought they were so much more sophisticated because they could discern when something was a problem and get away - and those humans need to learn how to do it. But instead the little girl keeps telling the alien, you don't leave your family and you don't run away. You go into the problem and you work it out.

And everyone is transformed.

Christians, like the little girl, don't run from the darkness. We walk head-on into it. We are not afraid of whatever darkness is there because we carry a light that is so much bigger, so much more powerful than any darkness the world can offer. We carry the light of Christ, the light of Love.

It's advisable not to go alone. Christ created a community of followers, not individuals, and said ‘Now go as a body so that we can all carry this light into the darkness together, and when that is complete, we will all be one.’ The second coming will be accomplished, because the second coming is Christ, who is all around - Christ in all of us, Christ in all the world - and there's no need to be looking out there for someone else.

We read a story to the children at the Family Service (on Christmas Eve) about an organ grinder and a monkey who were homeless. The little girl didn't know what homeless meant, but she did ask where they slept. She got up late one night (to see for herself) and realized they were sleeping on the street. She looked into the organ grinder's eyes, and she saw a deep sadness. She asked her mother could he come to dinner, and the mother said, “No. He's a stranger.” But the little girl didn't give up, and in the end, from that compassion drawn from the Divine in her, the little girl saw the darkness in this man's life and said, ‘We need to bring love there.’ And she did; and the man found community and dinner and a place to sleep.

What is it in our world today that makes us afraid, makes us want to run away like the alien? Or like the mother say "No." Where do we find our comfort? Do we find it by being middle class, upper middle class Americans who have a place to sleep and food that's guaranteed to be on the table next meal? Do we find it by coming to our church and protecting ourselves from all the trouble out there?

Or do we find it by walking into the problem? By taking what we get here - the unity of our bodies and our souls with God - and bringing it out there?

If you've never been, come (to Redeemer) on any Wednesday when we're doing our feeding ministry - the Shepherd's Table in the afternoon and the Food Pantry at night - and you'll see what happens when love responds to the needs of our community. It's a beautiful thing. It's transforming. And that's what Christmas is about, transforming ourselves; letting the Christ be born in us again. For real.

Now, we're not in the time of the Emperor Quirinius, but we're in the time of President Obama and whoever else is coming next. We're in the 21st century, it's real time, real place, and Christ is born in us in a real way. It's not an idea, it's not a belief. It's real, it's embodied, and it's our bodies.

So when you say "Merry Christmas" to someone you're talking to, let your light shine through your eyes and make a real connection. I've noticed that when you look at someone and you say "Merry Christmas", if you don't look away right away and hold that gaze for just a moment, do you know what happens? You enter into each other. The God in me recognizes the God in you. There's a moment where we're joined.

So instead of just saying "Merry Christmas" and ringing bells and stuff, have that moment. Invite that moment with someone, especially… especially if you come across someone who has that sadness, whose darkness is apparent when you look at them. Give them that extra second or two for the light to join you two together. And watch what happens.

I promise you, both will be transformed. That's the whole idea. Merry Christmas. Amen.