I had the privilege once again of supplying at St. Mark's Episcopal Church in Chester, SC. My sermon is below in text and audio formats (two of them).

(Note: if the above player doesn't work on your device click HERE. 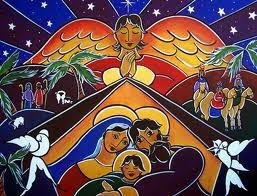 We gather together today to joyfully receive the gift of our Redeemer, to collectively behold him with sure confidence of his love for us and his purpose for our lives. Having prepared ourselves for this during Advent, we stand together now ready to be reborn with him, as daughters and sons of God.

It is truly a joyful moment - for us and for the whole world. The reason is, we are not passive observers in this Christmas story, or in the continuing plan of redemption. We are active participants.

We aren’t here today simply to recount the first chapter of the greatest story ever told. We’re here to live it again.

Each of us is alive and breathing and here in this moment because God wants it that way. God has sent us to participate in making manifest the will of God on earth so that everyone will come to know the Good News of salvation in Jesus Christ. Each of us has our part to play, our obedience to give, and our shame to bear as we live into our purpose.

Luke’s gospel narrative demonstrates this for us through Mary, Joseph, and the shepherds. They show us how doing our part requires us to trust God’s love, to go where God sends us, and then tell the world the Good News we have to share.

Coming up pregnant prior to her marriage to Joseph, Mary could have been stoned to death for adultery. That was the law. She could have said, ‘No’ to the public shaming her pregnancy would bring her – but she didn’t. She told the angel Gabriel that she would do whatever God asked of her. By giving not only her ‘Yes,’ but her body and her life to God, Mary participated with God in bringing about the will of God on the earth.

Being a righteous man, Joseph, who was a descendant of the great King David, could have said, ‘No, I won’t go register. I won’t participate in this unfair, unholy, earthly institution which will feed the monster Roman government that occupies our land. He could have said, I won’t submit myself to the public shame Mary’s condition will bring to me.’ He could have said that, but he didn’t. Instead, he walked 90 miles to Bethlehem with his pregnant girlfriend to register as he was required to do. By doing so, Joseph publicly and legally claimed Jesus as his son, legitimating him and Mary according to earthly institutions.

Joseph’s journey also fulfilled what had been prophesied: that the Messiah would be born of the house of David in the city of Bethlehem. By going where God sent him, Joseph participated with God in bringing about the will of God on the earth.

As the plan unfolded for Mary and Joseph, it brought one degradation after another, culminating with their inability to find a decent place to lodge. We traditionally translate this problem as “no room at the inn” but a better translation, a truer translation is: “no room in the guest quarters.” (New Interpreter’s Study Bible, Abingdon Press, 1855.)

It may have been that there really was no room. The census would have brought lots of visitors to Bethlehem all at once. But given the shameful circumstance of Mary’s condition it was more likely that Joseph’s family simply wouldn’t admit them into their homes and the only place made available to them was the space where the animals were kept – a serious insult to the holy family.

In the big picture, however, the Word became Incarnate to reconcile the whole world to God. So even his place of birth demonstrates that truth that the poor, the judged, and those excluded from civilized treatment on earth are given a place of honor in God’s plan of salvation.

Which brings us to the shepherds, the first to hear of this world-changing event. The shepherds were as lowly as the manger that held the infant Messiah. The angel told the shepherds that the Messiah of God had been born in Bethlehem; a baby in a manger wrapped in bands of cloth. Well they thought about it, discussing it amongst themselves – it was a strange announcement, you know - then they decided to go see this baby.

The shame they bore? It was who they are: shepherds. They were dirty, smelly, not allowed to go into the place of worship, and not likely to be welcomed into the presence of, “civilized” people. That didn’t stop them, though. Despite the potential for rejection, the shepherds went to Bethlehem, found the baby, and made known what they had seen and been told – and everyone was amazed by what they said. Everyone. By speaking their truth despite the risk of rejection, the shepherds participated with God in bringing about the will of God on the earth.

But these events took place two millennia ago. What does it mean for us today? Why do we gather now to remember it?

In his book, “Jesus Today” Dominican priest, Albert Nolan, says this: “On the whole, we don’t take Jesus very seriously… by and large we don’t love our enemies, we don’t turn the other cheek, we don’t forgive seventy times seven times, we don’t bless those who curse us, we don’t share what we have with the poor...” (Jesus Today, Orbis Books, xvii).

Why don’t’ we? Nolan suggests that many of us believe that these are great ideals, but that actually doing them “isn’t very practical in this day and age.”

Well, I think Mary, Joseph, and the shepherds might have said the same thing in their day. Following Jesus has never been practical. Never. It isn’t supposed to be.

Following Jesus is revolutionary! And that is why we’re here today. We are the body of Christ in the world today. Our purpose is to do our part to bring about the will of God on earth.

We are all Mary, giving our “yes,” offering our bodies, our souls, and our lives to God. We are all Joseph, going where God sends us. And we are all the shepherds, proclaiming the truth we know despite the risk of rejection. We do that because the world that aches to hear it.

“Joy to the world, the Lord is come.” And he dwells in us.

May Christ be born in us today in a very real way. God knows, the world needs that.