Note: If the above player doesn't work on your device, click HERE for an mp3 audio format.

What a week this has been! I am so grateful that today is Trinity Sunday and that our lectionary speaks to every single uncomfortable aspect of the current chaos in our world. 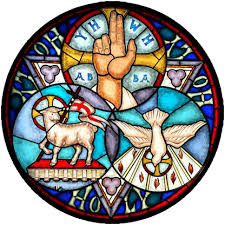 The Feast of the Trinity calls us to remember the very basic truth that God is a community of love living in a diverse, dynamic unity with itself. The Trinity is also the framework for how we are created to live, but the events of the past week have made uncomfortably clear how far we are from that. As we will say in our Confession: “…we confess that we have sinned... in thought, word, and deed...” (BCP, 360)

This week on our clergy call with our Bishop-elect, we heard this chosen one of God, this gentle spiritual leader of ours struggle with the reality that the current chaos is at his front door, it’s part of his life. He thinks about things like what if he’s stopped for a traffic violation? He knows that being a bishop doesn’t change that he’s first a black man. He didn’t say this, but I will - he could end up with a knee on his neck.

He also lamented having to have “the talk” with his 8-year old son in order to keep him safe. This isn’t happening out there, y’all. It’s happening in here.

The hope we have is that Jesus Christ is with us every moment, in every age, until God’s plan of redemption is fulfilled and the whole world is reconciled to God as one, diverse, dynamic community of love.

The Genesis story of creation reminds us that God created everything there is and declared it all very good - in all its diversity. Then God gave dominion over creation to humankind. This was not a gift of ‘power over,’ but a commissioning to serve. It was God entrusting the continuing care of creation to us.

Whenever we objectify one whom God has created or treat them as a commodity rather than with dignity and respect, when we exploit them for our own purposes rather than serve them to fulfill God’s will for them, we sin. Whether it’s the commercial trade of people as slaves a century ago, or sex slaves today, we must acknowledge that we have a history of allowing the objectification and exploitation of people.

It doesn’t have to be like this. We know better, and we’ve known for a long time, yet we have allowed the systems that perpetuate this sin to continue “…by what we have done and by what we have left undone…” (BCP, 360)

The black experience in America is vastly different from the white experience and recent events, including the murders of George Floyd and Ahmaud Arbry, and the resulting protests against racism and police brutality, have raised up for us that these systems in our common life aren’t working now and haven’t worked for a long time.

The phrase that should haunt our collective conscience is the one spoken by both Eric Garner and George Floyd as they died: “I can’t breathe.” This is our sin of racism.

I was in Shelby, NC when Dylan Roof, who murdered nine African Americans as they prayed in their church, was arrested less than a mile from my house. I watched as he was caught, handcuffed, and put into the police vehicle, the officer gently guiding his head so it wouldn’t smack on the car as he entered.

How vastly different it was for Ezell Ford who was walking in his neighborhood; for Tamir Rice who was playing in a park; for Philando Castille who was driving home from dinner, for Breonna Taylor who was asleep in her bed.
This is our sin of racism.

Unarmed African Americans who call out and protest this pattern of injustice are called thugs while fully armed, white people storm a state government building, shutting it down, with no consequences, and are called “good people.” This is our sin of racism.

In each era, it is the Good News of salvation in Jesus Christ that sets the captives free - from those first oppressed Jews in Jesus’ time, to the oppressed people of color in our own time who are shouting their cries for freedom, for value, for life.

In response, I often hear well-meaning (mostly white) friends lament instead about the protests-turned-to-riots saying things like: “These protests don’t help their cause,” or “Destruction of property won’t accomplish their goal.”

Speaking about the protests, Kareem Abdul-Jabbar said: “Yes, protests often are used as an excuse for some to take advantage, just as when fans celebrating a hometown sports team championship burn cars and destroy storefronts. I don’t want to see stores looted or even buildings burn. But African Americans have been living in a burning building for many years, choking on the smoke as the flames burn closer and closer. Racism in America is like dust in the air. It seems invisible — even if you’re choking on it — until you let the sun in. Then you see it’s everywhere. As long as we keep shining that light, we have a chance of cleaning it wherever it lands...”

Keep shining the light… There is our path forward.

Our Presiding Bishop, Michael Curry commissioned us last week to “channel our holy rage into concrete, productive and powerful action.” He said we must make a “long-term commitment to racial healing, justice, and truth-telling - knowing that, without intentional, ongoing intervention on the part of every person of good will, America will cling to its original, racist ways of being.” Curry exhorted us to stand with people of “every race and religion and national origin and political affiliation” and say “’Enough! We can do better than this. We can be better than this.’”

It is time for us to put things in order, as St. Paul said, because our sin of racism has led to a critical moment of social and cultural disorder. “Now is the time [Bishop Curry said,] for a national renewal of the ideals of human equality, liberty, and justice for all. Now is the time to commit to cherishing and respecting all lives, and to honor the dignity and infinite worth of every child of God. Now is the time for all of us to show — in our words, our actions, and our lives — what love really looks like.”

The question for us is: what will we actually do in response?

We, like Jesus before us, must willingly drag our crosses to the place of crucifixion of much of what we hold dear in order to open the way of freedom and peace for all. It will hurt us as it did our Savior. Pain is part of healing.

When I was a young mother, I was burned when cooking oil splattered up on me leaving first, second, and third-degree burns on my right side. As part of my treatment, I had to go in and a nurse had to dig out the dead skin as the new tissues formed deep down. Left un-sloughed, the wound would have become infected. The nurse gently and apologetically acknowledged to me that is was going to hurt - which it did - but that it was necessary for my healing.

This is where we are. We are infected by racism because of “what we have done, and … what we have left undone.” (BCP, 360)

We can choose to sit by and let the old ways be restored. Or we can choose to heal, knowing upfront that the process will be painful. As believers, however, we already know the choice we must make. We said it every week in our Confession: “We are truly sorry and we humbly repent.” (BCP, 360)

Some of us at Calvary experienced this at one of our recent Bible studies. The discussion went to very divergent experiences of racism and the recent protests. The discussion was passionate and difficult, but also respectful and loving. In the end, we were reconciled into an even stronger community of love, transformed by the Spirit who led us all to a moment of crucifixion and resurrection.

We know, because he promised it, that Jesus is with us, tending to our collective wound as parts of us die and new life is formed deep down in us. He knows what we face because he faced it first. But through his resurrection, Jesus raised us up with him into the Trinity of God by the forgiveness of our sins and made us part of the eternal community of love. Now he sends us into our world to do the same. The time is now, as Bp. Curry said, “for all of us to show — in our words, our actions, and our lives — what love really looks like.”

Posted by Rev. Dr. Valori Mulvey Sherer at 4:30 AM