Lectionary: Exodus 17:1-7; Psalm 78:1-4, 12-16; Philippians 2:1-13; Matthew 21:23-32
Our gospel story today starts with the religious authorities asking Jesus a question: “By what authority are you doing these things and who gave you this authority?” We who read this today have to wonder what were the “things” Jesus was doing?
It helps to look at what led up to this moment. This chapter of Matthew’s gospel begins with Jesus’ triumphal entry into Jerusalem on a donkey with people shouting “Hosanna! Blessed is the king who comes in the name of the Lord.” This was a public reception of the Messiah by the people, and a grand show of the divine authority Jesus possessed.
Then Jesus goes to the temple where he turns over the tables of the money changers in an angry application of this authority while quoting the voice of God in Scripture: “My house will be called a house of prayer, but you have made it a den of thieves.”
It’s important to remember, as one commentator said, that it is the authority of the religious leaders that “Jesus defied when he overturned the tables of the moneychangers because moneychangers would require the approval of religious authorities to pursue their business in the temple.” Jesus’ usurped the authority of the religious leaders calling out their corruption: lining their own pockets by exploiting the poor who came to pray.
People began to flock to Jesus, and he healed them, even the blind and the lame. This display of divine authority was quickly winning over the crowds and the religious leadership realized they couldn’t control it, which leads us to their question in today’s story.
Jesus is in the temple teaching, as a rabbi would be. The religious authorities, who represent the holders of divine authority, confront Jesus, publicly asking him by what authority he had been doing all of these things.
Jesus answers like a quintessential rabbi: if you can answer my question, I’ll answer yours; and he asks them: by whose authority did John baptize people - was it divine or human?
They can’t answer ‘divine’ since they didn’t believe John or receive his baptism. Neither can they answer ‘human’ since most of the people believed that John was a prophet sent by God and if the religious authorities openly denied that, the people might revolt against them.
The only safe response they could make was, “We don’t know” but their answer only further undermined their authority. True to his word, Jesus replied to them with a victorious dismissal, “Neither will I tell you by what authority I am doing these things.”
While he had center stage and wore the crown of authority, Jesus publicly challenged the religious authorities to interpret his rabbinic teaching. “What do you think?” he asked, and he told the parable of the two sons: A father tells his sons to go work in the vineyard. The first son says, no” but ends up changing his mind later and going. The second son says, OK, but doesn’t go. Which son did the will of the father?
Caught in another spectacularly laid trap, the religious authorities had no choice but to answer, ‘the first son,’ after which Jesus springs the trap. Speaking directly to the religious authorities who refused to repent when John called them to it, Jesus says, know this: even the wretched tax collectors and prostitutes, who are like the first son, will enter the kingdom of heaven before you who, like the second son, refuse to repent.
That’s a pretty scathing rebuke of their authority, their morality, and maybe worst yet, their place in the hierarchy. Being used to being first, Jesus proclaims they will be last, behind even the worst of the worst sinners in their culture.
“So the last will be first and the first will be last.” (Mt 20:16) In case we missed that point in last week’s gospel, it’s repeated for us here.
Why is this such an important point? Because it is at the very heart of our faith and beautifully stated in our Collect today: “O God, you declare your almighty power chiefly by showing mercy and pity.” Think about it; God’s almighty power is declared primarily in God’s compassion for those who suffer and God’s willingness to act to relieve that suffering. 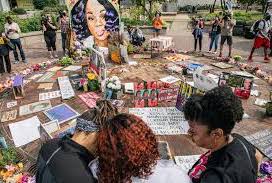 We who work in God’s vineyard today, are to declare this same truth and do this same work. I promise, we don’t have to look far to find people who are suffering and in need of compassion. With over 200,000 people dead from COVID, there are that many families grieving right now. Our isolation from in-person contact with friends and family is wearing us out.
Add to that the pain and frustration of African Americans who are denied justice from an unjust system that allows armed white supremacists to storm a government office undisturbed while using lethal force against a black child playing the park, or a black woman asleep in her bed, or an unarmed black man with and obvious mental disability.
We also don’t have to look far to find people who need to repent. In fact, we only have to look as far as the mirror. We all need to repent. We need to change direction collectively and walk in the way of righteousness, as John the Baptist did.
John was in right relationship with God and the people God sent him to serve. His oppositional relationship with the unjust, unmerciful rulers who killed him was right too - because he called out the truth about them, saying what everyone knew but was afraid to declare: that they were corrupt and needed to repent.
Like John, we need to be truth-tellers about our corrupt, unmerciful earthly powers - both historically and presently. We need to have compassion for those who suffer and be willing to act to relieve that suffering. 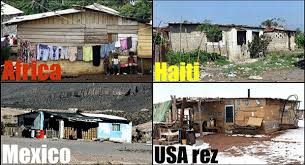 We can do that by amplifying the voice of the oppressed among us, people who have been systematically executed, impoverished, and tortured by our earthly authorities: African Americans executed today as horribly as they have been for generations; indigenous peoples who suffered near-complete genocide and who continue to suffer in the “third world conditions” of the reservations we exiled them to; Mexican children taken from their parents and put in cages at our borders, and now allegations of forced sterilizations of Mexican women in a detention center in GA.
None of this is new in human history, but our response today can be. We can choose to repent.
We can choose to re-aligned ourselves in right relationship with God, whose almighty power is chiefly declared in showing mercy and pity. We can choose to get into right relationship with one another, respecting the dignity of every human being as our Baptism calls us to do.
We can choose to repent and bear the divine authority of God into our world today by letting down our guards and opening ourselves to feel and acknowledge the suffering of God’s people among us instead of denying it or dismissing it, or blaming them for it in order to maintain our comfort and advantage.
We can choose to repent and bear the divine authority of God into our world by being truth-tellers, calling out corrupt powers and systems in our world, even when that might lead to our own discomfort. If we are to be of the same mind that was in Christ we must, as St. Paul says, look not to our own interests but to the interests of others. “Do nothing from selfish ambition or conceit, [Paul says] but in humility regard others as better than yourselves.” Putting others ahead of ourselves is at the heart of our faith, for the last will be first and the first will be last.
I close with a prayer from our hymnal that sang in me as this sermon wrote through me. It’s hymn  #594: “God of grace and God of glory on your people pour your power. From the fears that long have bound us free our hearts to faith and praise. Cure your children's warring madness; bend our pride to your control; Save us from weak resignation to the evils we deplore. Grant us wisdom, grant us courage for the living of these days, serving you whom we adore.” Amen. (1982 Hymnal, #594, CCLI # 11330380)
Posted by Rev. Dr. Valori Mulvey Sherer at 6:00 AM