Note: If the above player doesn't work for you, click HERE for an alternative audio format.

It can be difficult to connect the truth we know about the transformative effect of Jesus’ resurrection to how we live that in our present reality. Thankfully, today’s Scripture helps us make that connection.

This gospel from John illustrates so well the very human experience of getting on with life while still in that foggy state of consciousness that follows any extreme experience – in this case, the execution of the Messiah and then his appearances to them afterward. He’s dead and yet he lives. Imagine how hard it was for those first disciples to process this. 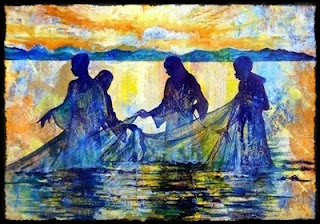 So, Peter does what most of us do – he makes a first step back into life as he knows it: “I’m going fishing” he says. There is nothing extraordinary about this statement. In fact, the beauty of it is its simplicity. Peter was a fisherman. He went fishing. He did what he does… in all the fogginess of his state of mind. Peter’s nascent leadership of this tribe of transforming souls is made evident by the others’ response: “We’re going with you.”

The gospel writer tells us they caught nothing. No surprise there. Going through the motions rarely generates any fruit, but it does help us carry on while the transformation from death to resurrection life is happening in us.

It’s interesting to note that Peter and the rest went fishing in the night. We know this because we’re told that it was just after daybreak that Jesus appeared to them. They went, therefore, from darkness to light as they processed what the resurrection of Jesus meant for them.

Not recognizing Jesus at first, even though they’d already seen him several times, and even though he called them “children” as he was wont to do, they obeyed the voice that spoke to them in their fogginess of mind, and the very ordinary thing they were doing became extraordinary. The fruit of their fishing was huge – so huge it broke the earthy container attempting to hold it.

Ever gently guiding them in this transformative process, Jesus stood on the beach and called them to come to him and eat food he had already prepared for them. Jesus was calling them from the waters of rebirth back into life on the earth. He fed them fish for their stomachs and bread for their souls. All the while they’re still in that liminal, foggy state of consciousness not daring to ask who he was because they knew it was the Lord, they just didn’t know how it could be…

Jesus questions to Peter grant him the real opportunity to repent of his betrayal and use the pain of it to transform his upcoming ministry which was to feed and tend the newly forming flock of the Good Shepherd. We all have humanity that gets in our way, but we also all have forgiveness that frees us to live into our divine purpose.

Also accomplished in this conversation was a redirection. Peter and the others (including us) keep looking for Jesus outside of ourselves. Jesus redirects Peter (and us) to find Jesus within ourselves, in our love and care for the flock of Christ.

Then Jesus issues a subtle warning that our divine path will take us where we do not wish to go. It took Jesus there. “Follow me,” he says. The comfort in this simple statement is that Jesus is always there, a step ahead of us, encouraging and empowering us as we do the ordinary things we do, transformed into extraordinary, by his spirit which dwells in us.

Some of us, however, get bogged down in the earthly. When that happens, God acts to set us free. The story from Acts illustrates this for us, showing how God restores us to a path of life when we are going down to the grave, as the psalmist says.

Saul was a Pharisee bent on protecting the Jewish tradition he loved. So zealous was he in his endeavor, that he found a way to justify hunting and killing those whom he thought threatened it, namely the followers of Jesus. So, God came to him and the brilliance of the light of love struck Saul blind, rendering him helpless to do anything but listen to God, then make a choice on how to respond.

How many of us have seen people whose eyes are open yet who see nothing? It’s a very human condition.

As God is sending Saul to a disciple of Jesus named Ananias, Ananias experiences a divine revelation. God asks Ananias to lay hands on and heal Saul, who is on his way to him. Ananias asks an important and familiar question to many of us: Are you sure, God? This one is pretty brutal.

God was sure, and Saul became Paul, an apostle of the resurrection – eyes opened in faith by the faithful and very human contact of the disciple Ananias.

As I said, it can be difficult to connect the truth we know about the transformative effect of Jesus’ resurrection to how we live that in our present reality. The only way I know to do that is to listen. For some of us it takes being struck blind and helpless as Saul was, or hopeless as the disciples were, to finally stop and listen.

In 1994, Steve and I took our family to live in his hometown of Selma, AL, in order to be present with his parents as his father was dying. We attended St. Paul’s Episcopal Church there – a synchronicity of the first order, as you’ll see. On Ash Wednesday of that year, as I stood in line for ashes, a draft of air from the floor vent on which I was standing rose up and I felt the brush of it on my face. Almost immediately, my eyes began to burn and tear.

The next morning, the pain was nearly unbearable so I went to the eye doctor and learned that my eyes and face had suffered severe chemical burns. I was blinded for two weeks, during which time I was bedridden. My children were 12, 3, and 2 years old. Steve, some friends, and our housekeeper kept our household functioning during my incapacity.

So, there I lay for two weeks, helpless to do anything but pray and listen to God. I found myself unable – finally - to avoid God’s continual call me to begin a path to ordained ministry.

Finding and walking our divine path doesn’t mean we suddenly lead lives of blessing and favor. That’s a false understanding, as Jesus made very clear to Peter, and as Paul’s life illustrates. These apostles of the resurrection were imprisoned and finally killed for speaking love into the world.

I know the author of the gospel indicates that Jesus’ statement points to the death Peter would suffer in the world, but I also hear in it that God may be the someone who takes us where we do not wish to go. Even Jesus experienced this as he prayed in the Garden of Gethsemane – until he let go his life and trusted in God’s plan of redemption working through him.

Living into our divine purpose means letting go of our lives and letting God’s plan of redemption work through us. The story of Saul being transformed into Paul shows how hard that is for us. Paul is an icon of answering Jesus’ call to lose our life in order to save it; of dying to self in order to live.

I close with an invitation: this week, let’s all make time to listen; real time we schedule on our calendars or adapt into our prayer and devotions time. During this time, let’s listen together, as a community, for this: what are the ordinary things do we do that God seeks to make extraordinary through the transforming power of the resurrection in us?

God bless us as we open ourselves to listen and make our choice to respond.