One of my favorite things about Scripture is that there is always new revelation awaiting the one who reads it openly, innocently, receptively. The problem most of us tend to confront when we read Scripture is that we’ve been taught to understand and visualize the stories in a singular way. God is that grand-fatherly old man with a long white beard, like the image created by Michelangelo in the ceiling of the Sistine Chapel. Jesus is a very western looking Palestinian Jew: light-skinned, sometimes with light or blue eyes, and smooth, wavy hair that goes to his shoulders. And the Holy Spirit almost always looks like a white dove. 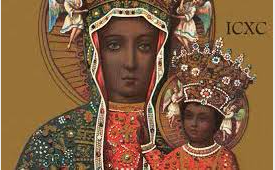 Culturally agreed upon images and traditional ways to understand Biblical stories tend to develop over time. By itself, that isn’t a bad thing, as long as we remember that the revelation of God to humankind is continual, so clinging to traditional images, understanding, and practice for habit’s sake, or out of fear of leaving “orthodoxy” limits our freedom to grow and God’s freedom to grow us. The “truth” has not been established by any system or religion or forebear in the faith. The truth exists only Jesus Christ who is living and active in the world, and in us.

When we hear the Parable of the Sower from our gospel reading today, most of us were taught to picture God as the sower and ourselves as the soil. We listen asking ourselves, which type of soil am I? I want to be the good soil that produces fruit!

But when we listen to the parable that way, I have to wonder… where is the challenge that Jesus almost always included in his teaching parables? Where is the twist in the plot that points to the counter-cultural nature of God’s reign?

So, let’s expand the window through which we are looking a little bit. Our gospel reading starts with the words that same day, which refers to what has just happened in the previous chapter. The Pharisees have accused Jesus of being a law-breaker because he healed a man on the Sabbath and allowed his hungry disciples to pluck grain on the Sabbath. They also accuse Jesus of healing a demoniac by the power of Beelzebul. Jesus responds to these accusations by calling the Pharisees a “brood of vipers” and an” evil generation.” Heavy duty!

This is where our story today picks up. Jesus is a religious rebel who challenges the traditional understanding of his time, and in spite of the opposition to Jesus by the religious leadership, huge crowds continue to gather around him, hungry for what he has to offer.

So, what is Jesus offering in today’s gospel story?

Jesus begins his teaching saying, “Let anyone with ears listen.” This is obviously not a literal request. They probably all had ears! But Jesus is asking them to listen differently… freely, innocently (like an infant); to open themselves and go beyond their traditional, habitual understanding.

In the Parable of the Sower, Jesus describes the sower as an extravagant gardener who casts seeds everywhere: on soil, pavement, into thorns…everywhere. The sower tosses the seed out in such a way that it’s possible new life might take root in the least likely of places. Why isn’t the sower more careful? the listener is thinking. What a waste of seed.

If the gardener is God, which is the traditional approach to this parable, then God is extravagant in speaking the plan of redemptive love into the world and there are four ways we listen - but only one of those ways is obedient. To be obedient isn’t simply to do as we’re told but to hear, take the word of God in so it can have its effect on us, then respond from that transformed understanding.

Here are the four ways Jesus says people tend to listen. See if any feel familiar.

First, there are the very busy listeners who are persistently on their way somewhere. These listeners can be very “devout (and sometimes very demanding) about the correct way to understand God and Scripture, but in the end, the busy-ness of their lives snaps up their attention like birds eating seeds off the sidewalk, and they produce no real fruit for God.

Next are the on-fire-for-Jesus listeners. They are faith-filled, passionate, and ready to get stuff done! But somehow, it never gets done. They don’t actually take in the Word, so they aren’t transformed by it. Their passions remain only in their thoughts, so they don’t make any real changes in their lives or in the world. They burn out quickly and sit back until the next passionate awakening, only to repeat the pattern. They too produce no real fruit for God.

Then there are the cell-phone listeners. They’re looking at you, but listening to the phone in their ear. Money, position, and other self-centered concerns distract them, take priority, and become the focus of their time and attention. Witnessing the good news and magnifying the reign of God become what they can manage to fit into their spare time - and everyone knows, there is no such thing as spare time - so these listeners also produce no real fruit for God.

And finally, there are the servant-listeners. These listeners put God and neighbor before self and therefore, produce continual fruit. Servant-listeners realize that obeying God doesn’t mean giving up their free will or freedom, but rather expands their understanding and widens their reach. Servant-listeners listen openly, innocently, and so they are able to hear and understand “what things they ought to do” (as our Collect says). The Word of God transforms them so they see and understand differently, more completely. As a result, they realize that it is God who gives them the “grace and power faithfully to accomplish” those things, so they surrender their plans and their habits and offer themselves fully to God.

Servant-listeners produce fruit humbly and continually because their minds are set on the things of the Spirit, as St. Paul says. They have detached from seeking the rewards of the world, which gives them true freedom because the rewards of the world are manipulated and sold to us by those who stand to gain from them. An example is the shampoo company that coined the phrase: lather, rinse, repeat. By convincing us that we needed to wash our hair twice every time in order to be beautiful, they doubled our use of their product. Our hair was no cleaner or more beautiful than it had been before, but we bought the concept and they raked in the money.

It’s a simple example, but there are other more malignant ones that are part of our traditional and habitual experience. For example, colorism, which is discrimination based on skin color. It can happen across races and within the same race. Did you know that Queen Elizabeth I used to eat arsenic crackers to help her maintain her ghostly whiteness? Why? Because whiteness had become associated with purity and goodness - and we continue to buy that bill of goods today.

This deception lives out now in something called the “school to prison pipeline.” According to “the Education Department's Office for Civil Rights, black students are three times more likely to be suspended or expelled than white students… Trouble at school can lead [a student of color] to their first contact with the criminal justice system. And in many cases, schools themselves are the ones pushing students into the juvenile justice system — often by having students arrested at school.” Source Children of color become terrified of getting in trouble at school, making them more vulnerable to bullying because white students know the students of color have to avoid getting in trouble.

In his 2018 study* called: “The color of punishment: African Americans, skin tone, and the criminal justice system” Harvard sociology professor, Ellis P. Monk says, “it isn’t just being black that makes a person more likely to be sentenced to jail in the US, it’s how black they are. A person’s lifetime chance of having been arrested, the study found, is directly proportional with the darkness of their skin… After accounting for differences like gender and level of education, [Ellis] found that African Americans have an overall 36% chance of going to jail at some point in their lifetimes. Dark-skinned African Americans, meanwhile, have a near 66% chance. That’s a full 30% increase.” Source

We’ve been sold a bill of goods for generations that black bodies are impure, bad, or dangerous - and it’s time we stop buying into it. It’s time for us to be servant-listeners and stop judging our neighbors by the standards of the world, standards that were intentionally manipulated to further the wealth and power of an elite, self-centered group.

Jesus was a religious rebel who challenged the traditional understanding of his time, showing us how to do it in our time. As it was for Jesus it will be for us: there will be opposition to upsetting the status quo, but there are crowds gathering around our country and around the world who are hungry for the freedom of the truth that is found in Jesus Christ.

How will we listen and respond? In truth, we are, each of us, all four of the listeners Jesus speaks about at different moments in our lives. Together, however, we can choose, in this moment, to be a church of servant-listeners. That is my prayer and my hope. Amen.