Many modern Christians hold the idea that marriage, that is, the union of one man and one woman in a life-long covenantal relationship, is an institution created by God in the Genesis story of Adam and Eve. It is clear, however, from the Old Testament that many of the Jewish patriarchs had multiple wives, e.g., Abraham, Solomon, Jacob. Polygamy was still in practice, though less so, during Jesus’ time. Divorce was an accepted practice as well, but only the husband had a legal right to demand it. For centuries, marriage was a private, family matter and most marriages were arranged by the father of the family or the legal guardian.

It was St. Augustine of Hippo who, in the fourth century, first described marriage as “a sacred sign, a sacramentum, of the union between Christ and the church.” In the fifth century ecclesiastical blessing on marriage was only required for priests and deacons. It wasn’t until the eight century that “church weddings” became common practice.

Historically, the concept of marriage has evolved from polygamy to monogamy, from property exchange to consent, from duty to love. Each cultural shift in understanding has led to a shift in theological understanding and in the development and application of sacramental rites for marriage.

Our cultural, theological, and ecclesial understanding of marriage continues to evolve. We are confronted almost daily with changes in legislation around the country on the issue of marriage. As we study, legislate, and enter into marriages in the world we live in today, it may help to remember that in the thirteenth century, the only legal marriages were those conducted in a church because the church and the state were the same entity. Such has never been the case in American history or in American church history. It hasn’t “always been this way” as some voices say. It has always been evolving.

In the Episcopal rite of marriage, we pray for the couple, asking that by God’s Holy Spirit “they may grow in love and peace with God and one another, that their life may be a sign of Christ’s love to a broken world, and that they may be given such fulfillment of their mutual affection that they may reach out in love and concern for others.”

Christians are a New Covenant community commanded by Jesus Christ to love God, one another, and ourselves as he loved us. St. Paul’s letter to the Romans assures us that the sacrifice of Christ for our salvation was made once, for all. Christians, whether heterosexual or homosexual, form a community whose individual members constitute equally important parts of one body, Christ’s body; and we are all saved through faith, by grace. Marriage is one way we all can reflect this truth is our world.

Still in the season of extemporaneous sermons so I offer you the audio of the Easter 5 sermon. God bless you. Valori+

Continuing in this season of extemporaneous sermons, below is the audio of my sermon for Easter 4. May we hear, recognize, and heed the voice of God speaking in us - guiding, comforting, warning, and loving us. God bless you. 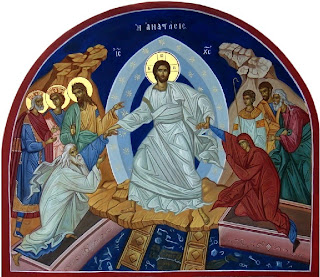