In my prayer the last few weeks, two friends among the communion of saints have figured prominently. One is Justin, a boy whom Steve and I called our “other son,” who killed himself 4 years ago, and the other is medieval mystic, Dame Julian of Norwich, who was my prayer partner during my process to ordination. and is a frequent prayer companion with me in my life. 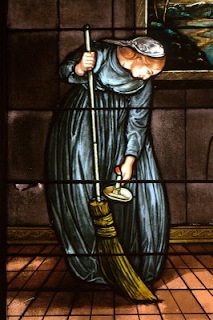 It wasn’t until I read today’s lectionary that I understood why these two had been so present for me lately. Each one has been an important tutor for me about love.

A little bit about Julian… One commentator says, “Julian’s meditations do not pretend to take away the pain of today’s world, but they can inspire believers to rise up in the midst of the struggle and fix their eyes on God. [Julian’s meditations] promote the virtues of self-acceptance and neighborly love and show how these qualities help [us] discover the face of God. This ability to recognize God in all things is crucial for [us] who are so prone to discouragement because [we] keep forgetting [we] are loved.” (Brendan Doyle, Meditations with Julian of Norwich, 8.)

Julian’s book is called Revelations of Love, and it describes her visions of Jesus’ suffering and death. When I first read it I was so surprised. It was exciting, joyful, and very disturbing, comforting, and challenging. She spoke of the “homeliness” of Jesus, that is, the simplicity of Jesus’ commands, his absolute proximity to us, his presence right here with us, and his powerful, intimate love of us.

We often forget that – that God’s love for us is powerful and tender, homely and intimate. This, I believe, is what Jesus is teaching us in today’s gospel from Luke.

Luke begins by telling us that tax collectors and other sinners were coming to hear Jesus speak. The very presence of these “ungodly” people was making the “godly” people around them complain: “This fellow welcomes sinners and eats with them.”

In response to their grumbling, Jesus tells three parables (note: we hear only two of these parables today.We’ll hear the third one next Sunday).The first parable is so familiar to us – it’s the iconic story of the Good Shepherd. So there’s the flock of 99, one gets lost, and the shepherd leaves the whole flock to go find that one who was lost. As we read this story, we picture that icon of Jesus, the Good Shepherd, wrapping the sheep on his shoulders, taking it safely home. It’s comforting.

The thing is, it was a comforting image for those first listeners. These were the Pharisees and the others who are already scandalized by the presence of these sinners among them. So now Jesus tells a story and makes God into a shepherd. It was shocking and disturbing to them because in that time, shepherds were dishonest people. They were scorned by good folk. They used to graze their sheep on other people’s land (which was basically stealing).They were unclean ritually, they could NOT have come to church. They were also unclean - there were no showers out in the fields, so they stank.

The Scribes and Pharisees would have been scandalized by this portrayal of God because God was NOT a stanky shepherd.

Then, as if that weren’t enough, Jesus goes on and tells the second parable. Only this time he cast God as… A WOMAN doing a menial task unworthy of even the lowest man: sweeping the floor of her home to find a lost coin!

Have you noticed there is no comforting, iconic image of God as a woman? Just sayin’…

Treasure: think about what this means… Think about being that valuable – a treasure to God.

How many of us truly feel like that? How many of us remember that the person we choose to hate is also a treasure to God and we must approach them that way.

Which brings me back to my “other son, ”Justin. Justin was in my youngest son’s class in high school. He’d had a rough childhood, and though he had loving grandparents and extended family, he had no parents. They were there, but they were absent to him, so he sought to create parent-like relationships, as he understood those, with a few of us.

Steve and I were Justin’s college parents. Our boys were going to college so I helped Justin apply for college, get financial aid, get his books, buy his medicines (he had severe juvenile diabetes). I bought his dorm supplies and later moved him in with my older son into an apartment off campus. Justin accompanied our boys to our house in NC for the holidays and witnessed what it looked like to be a son – something he didn’t know how to do.

He didn’t know that as a son he could make demands on his parents. He saw our boys doing it, and he even came to me and we talked about it. He didn’t feel worthy, though, to ask anything of us and he certainly didn’t trust love enough to risk it.

Steve and I worked very hard to assure Justin that our love for him was our choice. He didn’t have to earn it. It was there for him. We loved him. He was a treasure to us.

But Justin had grown up with a very rigid understanding of sin and of God. He judged himself for the dark feelings that he carried in him from his childhood. He believed that he must have been bad because God let so many bad things happen to him. Sadly, he also believed (as do many lost souls) that his diabetes was a punishment from God because of his badness.

In the end, Justin couldn’t do that. He couldn’t repent, and he took his own life. The consolation I have is that I believe that Justin is reconciled with God and finally knows how much we love and miss him. I believe Justin now understands the truth in today’s gospel: that each of us is a treasure to God.

As Christians we believe that the fullness of God is revealed to us in Jesus, the Christ. If we have ears to hear Jesus’ revelation of God in today’s gospel, we must repent of whatever concepts of God we have learned or cling to instead to the words of our Savior. Those are the words of life. To do otherwise is to be a foolish people who have no understanding, as the prophet Jeremiah said today.

(Note from the preacher to get the handout with the prayer of St. Teresa of Avila. This prayer helped me get through the loss of Justin, among other things, and helped me transform my own understanding of God.)

"He desired me so I came close.

No one can near God unless He has
prepared a bed for
you.

A thousand souls hear His call every second,
but most every one then looks into their life’s mirror and
says, “I am not worthy to leave this sadness.”

When I first heard His courting song, I too
looked at all I had done in my life and said,

“How can I gaze into His omnipresent eyes?”
I spoke those words with all my heart,

but then He sang again, a song even sweeter,
and when I tried to shame myself once more from His presence
God showed me His compassion and spoke a divine truth,

“I made you, dear, and all I made is perfect.
Please come close, for I
desire
you."

If we love God as God loves us, we will live humbly, nurturing every gift God has given us and our neighbors and using them for the glory of God and the welfare of God’s people.

If we love others, as Jesus commanded us to do, we will live in peace and forgiveness.

If we love ourselves, we will care for our bodies which God has crafted so marvelously for our use; and we will work to expand our hearts until we love like God loves.