In preparation for a book study with our bishop next fall, I’m reading “Canoeing the Mountains” by Tod Bolsinger. In this book, the author uses the story of Lewis and Clark to illustrate the current moment of transition the Church is facing.

As the story goes, Lewis and Clark were sent to find and claim the Northwest Passage, which everyonebelieved would be a waterway connecting the east coast to the west coast. The assumption was that the rivers from the east would lead up the Rocky Mountains, then back down the other side and continue west to the Pacific Ocean. When they arrived at the Rockies, however, Lewis and Clark discovered that no such water passage existed. Their canoes were useless in this new reality. They had to adapt and change or die.
This is the state of the church right now, the author says. We too must adapt and change or die.
Adapting is something we’ve been doing a lot of and we’re tired of it. The thought of fully reopening our churches this fall causes anxiety for some of us. Will we have the volunteers, the passion, the presence we used to?
Our reality has changed, and we aren’t sure we know how to go. Thankfully, our Scripture shows us the way– Jesus’ way. 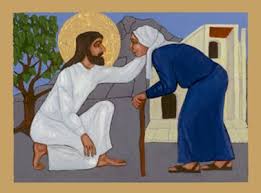 The gospel story from Luke, the physician, includes a story of physical healing, but it is so much more than that. Jesus is at the synagogue where he often was invited to teach. As he arrives, he notices a woman who is bent over. Jesus calls her over to him and without asking if she wanted it, he heals her, which enrages the religious leadership who remind everyone that the Sabbath is set aside for God. No work should be done, so Jesus, a rabbi, knows he shouldn’t have healed her. This is, after all, the way we’ve always done things…
Jesus’ reaction is priceless and affirms Dcn Jerre’s point last week that Jesus isn’t always “nice.” “You hypocrites” Jesus says to the leadership. You allow work for the sake of caring for your animals on the Sabbath, but you would deny this person, this daughter of Abraham, liberation from her bondage?
Interestingly, the laws on Sabbath behavior are varied and deliberately unclear, leaving room for things like caring for the needs of animals and some people. For example, babies needed changing, right? But because she was a woman, and clearly a sinner from their perspective given her infirmity, they would prefer to blame and dismiss her. But Jesus chose to use her to reveal the love of God in the world. That’s what all healings do.
I want to share the first part of this story from the King James version which I think says it better: “And behold, there was a woman who had a spirit of infirmity eighteen years, and was bent over and could in no way raise herself up.”
A spirit of infirmity is a condition that is recognized only by how it manifests, in this case, the woman is bent over. Luke mentions that she has been this way for 18 years. Eighteen is the biblical number for bondage. Finally, Luke tells us that the woman could “in no way raise herself up.’ Liberating her would take divine intervention – which Jesus offered her.
By choosing her Jesus clarifies for everyone present that this woman, whom they judged to be sinful, is worthy in God’s eyes. By choosing to heal on the Sabbath, Jesus not only reveals the hypocrisy of the religious leadership who hold people in bondage to laws of their own devising, he also reveals the true purpose of the Sabbath accomplished in a new way, in his Way of Love. Finally, by naming Satan, Jesus shows that God has power over all, including Satan.
Luke tells us that when the woman was liberated and raised up, she immediately began praising God. By the end of the story, they were all rejoicing. They had church that day, didn’t they? It happened in a different way than they were accustomed to, but it was a true fulfillment of the command about the Sabbath – to come together into the presence of God and offer praise.
In our Bible study this week, the question came up: did Satan cause this woman’s infirmity? Jesus seems to indicate that. The answer is yes, but only if you understand who and what Satan is and is not. 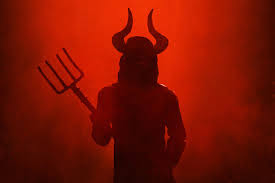 I’ve said this before, but the reading compels me to say it again: the Hebrew term “the satan” (which has a small “s,” btw) describes an adversarial role, not a particular character. “ (Elaine Pagels). We capitalized that S and made satan into Satan - a red demon guy who is nearly equal in power to God and who spends his time doing harm to God’s people, ultimately trying to trick them away from their salvation.
It's important to note that the word “satan” literally means “one who throws something across one’s path.” If the path is [the wrong one for us], the obstruction is good, thus “the satan” may have been sent by God to protect a person from worse harm. (The Origin of Satan, Vintage, 1996, pp 39, 40) If the path is [the right one for us], however, “the satan” is obstructing the will of God.
In our gospel story, the satan who bound this woman in infirmity was the belief that she was unworthy in the sight of God and that her infirmity was just punishment for her sin or the sin of someone in her family. Since she was getting what she deserved she shouldn’t ask for healing. That belief was an obstruction of the will of God, so Jesus cleared it from her path.
Her liberation from this obstruction was God’s doing. God raised her up, without her needing to ask, out of love - and her response was to praise God.
What I wish Luke had told us was how this woman’s life and service to God were changed by her liberation from bondage. I wonder how her synagogue community received this change. I wonder if or how this event affected this community’s approach to worship, to so-called sinners, or to God…
How does it affect ours?
The letter to the Hebrew’s reminds us that God’s call to us now may not look like God’s call to those who came before, but when God calls, the author warns, don’t refuse to answer – because God is shaking things up as they are right now and is building an unshakeable kingdom. It sure feels like that right now, doesn’t it?
Jesus demonstrates what this unshakable kingdom will be like. It will be a kingdom in which God sees and heals all wounds – a grace offered even before we ask because God knows that some of us harbor deep inner wounds that prevent us from fulfilling God’s purpose for us. It will be a kingdom in which God will seek, call, heal, and empower whom God chooses, when God chooses; and no earthly authority, doctrine, or institution can interfere.
Things are changing all around and within us. COVID hasn’t left us and despite the improvements in outcomes some among us are still suffering greatly from it and its long-term effects. Rather than wait till COVID is gone (which it likely never will be), we are called do more than find our way into the new normal that is emerging. We are called to co-create with God a better normal in which God’s unshakeable kingdom is revealed and manifested.
Awakening from our COVID slumber and planning for our program year beginning in September presents us with joy but also anxiety. So much has changed. Our familiar river doesn’t pass through this mountain. 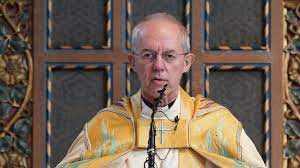 At his final address to the Lambeth Conference, the Archbishop of Canterbury, Justin Welby, said: “When we fear we cling to what we know. We clutch at what makes us feel in control.  I would add that we return to the church programs, events, and systems we loved because we know how to do those. They are our familiar canoes.
We’re tired of the steep learning curve COVID imposed on us two years ago. We love our old familiar canoes, and we just want to get back to paddling.
That’s what being bent down looks like for us now. We can’t raise ourselves up from it, but Jesus can.
Jesus knows our anxiety and weariness. He knows our inclination to revert to the comfort of the familiar.
He also knows our gifts and the plan of love for the world, so I promise, when Jesus touches us and raises us up, and we lift our gaze to see his face, we too will rejoice in the freedom we’re being given to live a new life on a divinely cleared path, one that enables us to show forth God’s powerful love in the world.
Rise up, Emmanuel, and rejoice. Amen.
Posted by Rev. Dr. Valori Mulvey Sherer at 7:00 AM No comments: