As most of you know, my husband Steve and I are very different kinds of people. He’s an extrovert. I’m an introvert. He’s a Southerner. I’m a Yankee.

Some of you have even wondered aloud how we’re married. It’s OK. We’re used to that. 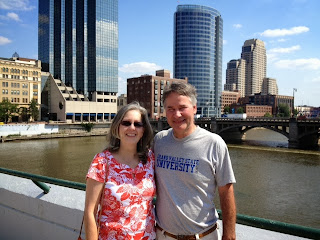 The truth is we are very different people, though we do share some important things in common: absolute devotion to our children, being moved by opera and restored by time spent in creation. We even share agreement in our ethics about money.

Not surprisingly, though, Steve and I had very different approaches to parenting our children. We still do.

When the kids wanted to spend the night at a friend’s house, for example, they knew Steve would say no
because they knew their Dad believed that the other parents wouldn’t supervise our kids well enough, or feed them good enough food, or enforce lights-out at a reasonable time at an appropriate time so they’d get enough sleep. So they didn’t ask Steve if they could spend the night out. They asked me.

They also knew that if they had waited until the last minute to do a homework project, they had violated my policy of: “Your lack of planning does not constitute my emergency.” So they didn’t ask me to run out for poster board at 9:00 at night. They asked Steve.

But the differences in our approaches to parenting created a wholeness for us because we could trust in our love for each other and in our mutual love of our children. The difference in our approaches also kept us balanced. There were times the kids needed to be protected from their own inexperience with life and other times they needed to learn from those experiences.

Not only did the children benefit, but so did Steve and I because we were constantly learning from one another and sharing in the gifts each of us offered.

The two men in the parable in our gospel story represent two very different approaches. Both are responsive to the call of God. We know this because both are in the temple praying. Both are also sinners – each in his own way.

The Pharisee lives an exemplary life, but his prayer is arrogant and prideful. ‘I’ve done all the right things and then some. Thank you, God, for making me so wonderful, unlike that tax collector over there.”

The tax collector, on the other hand, can’t claim a virtuous life. Most tax collectors back then couldn’t. They were basically Mafioso-type thieves. But his prayer is simple and humble: “…be merciful to me, a sinner.” The surprise in this parable is that this was the prayer acceptable to God. It was the tax collector whose prayer justified him, that is, restored him to right relationship with God.

This is a frustrating parable for many modern Christians who focus their attention on what they can see in a person’s life rather than what God is doing in a person’s heart. These Christians would want Jesus to finish the story. They would want Jesus to tell about how the tax collector’s repentance led him to amendment of life. How he left behind his immoral ways and got back onto the path of righteousness.

But that isn’t the point of this parable. This parable is about what’s going on in the heart of the person praying and how that points to the truth about their relationship with God.

The Pharisee, whom Jesus says is praying by himself, is truly grateful that he is living a righteous life and properly gives thanks to God for the comfort that offers his soul. But notice that the Pharisee asks nothing of God. He seems to believe his salvation is firmly in his own hands. His behavior is impeccable and although he looks good from the outside, all is not well because heart is closed to the transforming love of God.

Jesus says the tax collector is also praying alone, standing apart from everyone else in his shame, which also renders him unable to raise his eyes to heaven as he prays. Aware that his life choices have been anything but honorable, the tax collector seeks mercy. He knows he doesn’t deserve it, but he asks anyway. His behavior is shameful and although he looks bad from the outside, he has set his hope on the grace of God – and that’s why Jesus says he is justified.

Things aren’t always what they seem and this parable teaches us that it isn’t necessarily about what we do. It’s about what God is doing in us… yet another reason to heed Jesus’ command not to judge.

But I think there’s another important message in this parable: a message about community.

I wonder what might have happened if these two men had prayed corporately – as a community? What if the Pharisee, noticing the anguish of the tax collector who prayed beating his breast, had gone over to him, touched his shoulder and joined him in prayer?

Removing the barriers to their relationship might have given each a greater awareness of their own sin as well as the benefit of the other’s gifts. The tax collector might have learned from the Pharisee the practice of discipline which could have helped him to make better life choices, choices more in line with the Law of Moses, which has always been meant to help us align our lives on earth closer to the will of God.

The Pharisee might have learned from the tax collector the practice of humility which could have led him to a deeper spiritual life, one in which he could experience the overwhelming grace and love of the Almighty God, then manifest that love in the world.

In community the Pharisee and the tax collector might have been able to help one another increase their gifts of faith, hope, and charity, and support one another as they strove to love and keep the commands of God.

That is the blessing of diversity. It’s also the gift of community.

Let us pray: Lead us Almighty God, to respond to your call to us to come to your house, the church, where our hearts and flesh will rejoice in you; where we will be unified to one another and renewed by your life-giving nourishment of Word and Sacrament, so that we may continue together in our pilgrims’ way, having received such an increase of your gifts of faith, hope, and charity that they overflow from us into the world glorifying you and blessing your people. This we ask in the name of the Holy Trinity who is Community in Unity. Amen.