Christmas, 2014B: Birthing the way of humility

I was born in NJ, in Dec, in a blizzard, at 3:30 in the morning. The story of my birth is one of our family’s “legend” stories because of the extreme and dangerous circumstances of it. If you’ve ever been in a car driven by my father, you know what I mean. Add to that the blizzard and my mother in labor and you can see the
beginnings of a legendary birth story. 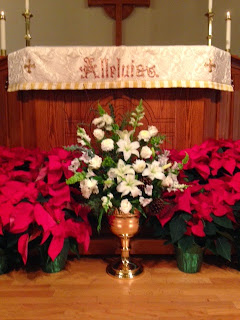 Through the years, I’ve noticed that people LOVE to share birth stories – especially the dramatic ones. We love the details, like how much labor the mother endured, what kinds of medical interventions (if any) saved the day,
whether or not the father keeled over from the gory reality of the birthing or from being overwhelmed by the miracle he was witnessing.

While it’s true that each of us is unique and wonderfully made in the image of God, and beloved of God, there is no birth story like the one we celebrate tonight. The reason is this birth story isn’t legendary – it’s true, and it changed everything for everyone, for all time.

This birth story is not only dramatic, it’s transformative. God became a human so that we could come to know God, intimately, actually, as one of us. Our relationship with God was transformed from a relationship with a scary, celestial being to one with a member of our own family, a brother, and a friend.

God became a human so that we could be lifted up out of our self-imposed exile in lowliness and reconciled to God whose deep desire to be in relationship with us has been the subject of our Scriptures from Genesis through Revelation.

The story of the birth of Jesus of Nazareth marks the historical moment when that reconciliation happened. God and humanity became one in Jesus. Think about that - the splendor and magnificence of the Almighty God in heaven was made one with the simplicity and humble reality of creation on the earth.

This really is good news! Being reconciled to God in Jesus became our reality in this birth story. And the lessons from this story are so many….

• humility (as in: do what you are commanded – as strange, uncomfortable, or risky as it sounds),
• trust (how many times does heaven tell us: Do not afraid when it comes near?)
• faith (nothing really is impossible with God)
• action (tell everyone and watch how they are amazed by truth).

But the one that stands out this evening is humility. To be humble is to hold a modest estimate of your own importance. It also means to be of low rank (socially or politically), to be unprivileged.

In this gospel story, all of the main players displayed humility. For example, even though Joseph was a descendent of David, he was not privileged and held no rank. He was a simple tradesman engaged to a peasant woman. Joseph and Mary really didn’t have a choice but to obey the edict to register in Joseph’s hometown of Bethlehem. There was no privilege his familial connection to King David, so he was not exempt from the trip – which was dangerous for a woman late in her pregnancy.

So they traveled the 90 miles, and arrived at the home of Joseph’s kin, only to be turned away. Being pregnant and unwed, Mary would have been judged harshly by her in-laws. Her very presence brought shame to the family.

The family wasn’t heartless though, they were just people of their time living according to the norms of their culture. Remember, judging an unwed pregnant woman persisted until only recently – for some, it persists still.

Anyway, Mary and Joseph were not invited to stay in the guest room (which is how the word “inn” translates). It didn’t mean a public hotel. It was a manger. Back then houses were typically joined to a manger which was used for storage and to shelter animals – kind of like a modern day garage or pole barn.That’s where Mary delivered her firstborn son – cast out by her in-laws, an embarrassment to them, with only a feeding trough to cradle her newborn.

Both Mary and Joseph knew the importance of this birth, but neither insisted they be privileged because of it. They simply accepted what came and allowed God to act in it.

Next there are the shepherds – a humble lot in that they too had no rank and no social standing. In fact, they were generally despised by “decent folk” exiled to the fringes of society. It was to these humble ones that heaven announced the good news first, making them the first witnesses of the miracle of the Incarnation.

They were also the first evangelists – the first to tell of the amazing, transformative birth story that changed everything for everyone for all time…and all who heard them telling about this birth story were amazed. What amazed them? Was it the details?

In the moment, the shepherds were terrified. The angel acknowledged that, then comforted their fear. Suddenly a whole lot of heavenly being appeared - praising God – but instead of being scared all over again, these humble shepherds knew they were in the presence of truth, and that this thing that was happening - this baby born in Bethlehem – was a truth worth telling.

Finally, there is God, who certainly has the privilege, rank, and importance to have had a different birth story, but God chose to come among us in humility. As one commentator says, “The birth of Jesus was a decisive energizing toward a new social reality.” His birth upset the status quo and earthly systems where those in authority “lord it over” others. (“Birth, A Guide for Prayer,” Bergan and Schwan, St. Mary’s Press, 1985, 26) His birth established a new way. The way of Jesus is a way of humility. As followers of Jesus, this is our way too.

Being a humble people means not overestimating our importance, but not underestimating it either. And that’s good news!

We are not God, which means we are not required to (nor could we if we tried) guide or control the world, other people, or even ourselves. That is the sin of hubris – which is the lesson of first two chapters of the Book of Genesis. God invites us instead to relax, relent, and rest in the love and care of God.

Nor are we to underestimate the value of ourselves or any other person, creature, or resource God has created and given us as gift. That is a sin too. We know this, because the story we re-tell today, the story of the day God and humanity began to coexist in a real, manifest way, reconciles those exiled to the margins and lifts them up as the first to partner with God in the reconciliation of the world to God in Jesus Christ.

The first shall be last, and the last shall be first. This is humility.

God humbled God’s self, and sought out humble partners to bring about the reconciliation of the whole world to God on that first Christmas Day. Not much has changed. God is still seeking humble partners in the continuing work of redemption. May God find us to be humble partners, ready to serve.