Our readings today show us the beginning of and the means by which life in the spirit of Jesus moved from his original followers to the whole world – including us today. The letter from John describes how the Good News of the resurrection of the Christ burned like a flame in the hearts of his followers. The book of Acts speaks of the fast-growing Followers of the Ways as “one heart and soul” - 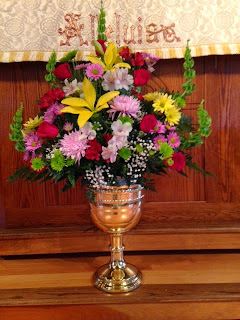 those who had sharing with those who did not so “there was not one needy person among them…” The psalm affirms that people who live together in unity, are richly blessed with life as the newly emerging church experienced with increases in numbers so huge, in the tens of thousands, that they struggled to keep up with incorporating all of these new converts.

But all of this happened because of the faithfulness of those first disciples. The gospel of John shows how the frightened, confused followers of Jesus stayed together in their breaking through from disbelief to belief, each in their own time and in their own way.

Mary, Peter, and John had been the first to visit the tomb and find it empty. Upon seeing the empty tomb, Peter believed. Mary, who was waiting outside the tomb out of respect, believed when she heard Jesus call her name. When she told the disciples that she had seen the Lord, they didn’t believe her. They believed when he appeared to them in the locked room. Thomas didn’t believe when the disciples told him they’d seen the Lord and he swore he wouldn’t believe until he placed his hand in Jesus’ wounds. But when he saw the Lord, Thomas believed. Examination of the wounds turned out not to be necessary.

This story of Jesus’ appearance to his followers in the locked room is so important…because it reminds us that unbelief is part of the life of the church. Think about it, Jesus had been telling his disciples that he would be killed and would rise again on the third day and that this was part of an overall plan by God for the salvation of the world. When it happened, not one of them remembered; not one of them believed – at first. Peter denied Jesus. The rest hid themselves away in a locked room afraid of what their own community would do to them.

Into this setting, Jesus appears, undaunted by the locked doors, and he says to them: “Peace be with you.” This isn’t just a word of comfort to them, it’s a gift of wholeness, shalom, being given to them. Jesus knows their unbelief and the fear it generates in them
so he offers them shalom which is life in harmony with one another, and the assurance that God is present and redeeming all things, all the time.

In this resurrection appearance to his followers Jesus gives the members of this new community the grace to live in harmonious unity
and he did it by breathing on them. In the same way God breathed life into the first humans, The Christ breathed new life into his followers.

But this new life wasn’t just a new way of being - it was the very substance of the Jesus’ own Spirit covering them, filling them, uniting them, making them one body, one spirit in himself. That’s why Jesus’ next statement is so important.

Since his own spirit has been breathed on them they are now empowered by that Spirit. So, he sends them out back into the world they have locked themselves away from, but he warns them that life in his spirit empowers profoundly. Whatever they forgive is forgiven in unity of God and what they hold unforgiven remains unforgiven.

It’s a warning because they now have the power to create unity or division to be partners in redemption or instruments of death.

It’s a choice. And in the community of Christ we call the church the choice of every individual affects the whole of the community. It’s also our prayer: forgive us our sins as we forgive those who sin against us.

In the early church, the members lived together as family. Since for many, becoming a follower of The Way meant being cast out from the temple community and the company of their blood-families, the church became the only family they had. Preserving harmonious relationships in this new family was paramount.

As a commentator says, “These new Christians are living as brothers and sisters––as family. They are taking care of each other––
making personal sacrifices to help each other––considering the well-being of Christian brothers and sisters above their own personal welfare in many cases. To live in that kind of harmonious community makes it possible to drop one's defenses––to assume the best of one's neighbor instead of the worst––to resolve differences without rancor––to live without fear of physical danger or financial catastrophe or personal rejection. It is a level of graceful living that humans seldom achieve. When they do achieve it, it is usually because of a common commitment to a higher ideal––or by the grace… of God.” (Source: lectionary.org)

This is living in the spirit of Jesus and it remains the goal of the church – our church - today. It’s why we gather together for Holy Eucharist. a gift given to us by our Savior. We come as individual members of the body of Christ to “let the grace of [our] holy communion make us one body, one spirit in Christ that we may worthily serve the world in his name.” (BCP, Eucharistic Prayer C, 372) And that’s why it’s important to come each week - not because it punches our “Go Directly to Heaven” ticket, but because it builds the bond of our community so that we live in the spirit of Jesus and serve the world in his name.

I close with a prayer from a devotional book I used during Lent: “We praise you, Lord, for your gift of Christian community, and we thank you as we humbly and with reverence celebrate … our communal eucharist. May we never fail to be grateful for the diverse people who make up the body of Christ and sustain our faith in each other at times when we disagree. In the face of disappointments and betrayals keep us thankful for the new commandment Christ has given us, and help us to better love each other as he has loved us, with a sacrificial and unconditional love. As we struggle with doubts and fears, help us to trust that you will always provide the nourishment we need. We as that you especially strengthen the faith of the many Christians around the world who are persecuted for daring to celebrate communion and the love of your Son Jesus Christ in whose name we pray.” Amen. (“God For Us, Rediscovering the Meaning of Lent and Easter,” Pennoyer and Wolf, eds)
Posted by Rev. Dr. Valori Mulvey Sherer at 11:34 AM