(Note: This article was written last week anticipating the feast day of this fascinating saint. Sorry for the delay in posting!)


This coming Sunday afternoon we will honor the feast day of St. Francis of Assisi with a traditional blessing of the animals at 4:00 p.m. in the churchyard. The blessing is always fun and amazingly peaceful given the number of animals unfamiliar with one another gathered together. 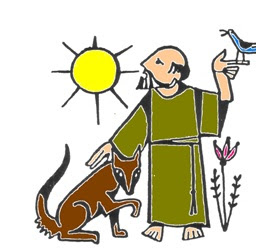 This tradition of blessing animals to honor St. Francis comes from his radical devotion to creation and his sense of relatedness to all that is created by God. Francis saw creation as sacramental, that is, an outward reflection of the grace of God. All things, therefore whether animate and inanimate, were to be treated with respect and reverence. Sitting by a river in the mountains of Western NC, is the best way I know to experience the sacramentality of creation and be filled with the wonder and joy of it. Some experience this witnessing a sunrise at the beach, or the brilliance of fall foliage.

Francis abhorred violence and war. Though he was a soldier in his young adulthood, Francis came to see all violence as an offence against Jesus’ commandment to love. He believed that to harm another person was to desecrate the image of God in them. In fact, it was his awareness of the image of God in all persons that led to Francis’ radical devotion to the poor.

So excited was Francis by the goodness of the Good News that he was compelled to share it with anyone and everyone who would listen – including animals. Some called him a fool for doing so, but Francis was no fool. As one theologian said, Francis’ “life and his relationship with the world – including animals, the elements, the poor and sick, as well as the princes and prelates, women as well as men, represented the breakthrough of a new model of human and cosmic community.”

The Church in Francis’ day was rich and powerful, as was Francis’ family. One day as he prayed, however, Francis heard Jesus speak to him, saying “Francis, repair my church which has fallen into disrepair as you can see.” Francis thought Jesus was asking him to fix the dilapidated San Damiano chapel in Assisi, which he did, but he soon realized that the “church” in disrepair was the larger Church, so Francis dedicated himself and his life to the “radical simplicity of the gospel, the spirit of poverty, and to the image of Christ in his poor.”

The wealthy and powerful people in Francis’ life, including his father, didn’t respond well to Francis’ decision. It was disruptive to their comfortable, justified way of life. The powers in the church didn’t respond well either for the same reason. Thankfully, the pope at that time, as worldly as he was, was moved by Francis and protected him.

As his life was coming to a close, Francis had his friars place him on a stone floor in his simple habit and called his community of friars and nuns to come near. As he prepared to welcome his own death, with certainty of the resurrection life that follows, Francis first blessed each of his followers saying: “I have done my part. May Christ teach you to do yours.”

Francis’ life was an embodiment of his faith. Our church and “the Church” today could use a dose of Francis’ foolishness of faith: his commitment to the Good News of salvation in Jesus Christ, his detachment from wealth and power, and his devotion to the image of God in all persons and creation. May Christ teach us to do our part today.

Note: All quotes are taken from “All Saints, Daily Reflections on Saints, Prophets, and Witnesses for our Time,” by Robert Ellsberg, Crossroads Publishing, 2002, pp 432-433.