The grace of obedience

I’m grateful for the story of the disobedience of Adam and Eve in the Book of Genesis. Like them, I often succumb to disobedience by attending to my own voice or the voice of a tempter, shutting out the voice of God who, as Isaiah says, calls to me, saying: “Incline your ear, and come to me; listen, so that you may live.” (Is 55:3) 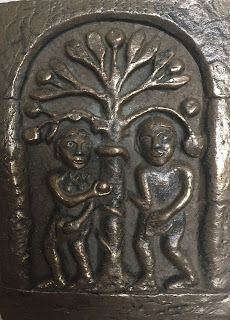 Raised Roman Catholic, I went to Catholic school for 8 years, during which time, and by the example of my nuns and mentors, I built a strong spiritual muscle for obedience. I’m not talking about the systematic dismantling of free will or coerced compliance with church doctrine. I’m talking about learning to trust in the experience of the mentor and/or the tradition of the Church and allowing that to support me regarding something I needed to work out for myself spiritually, theologically, etc., giving myself time and space to do that.

In my experience, a healthy relationship with obedience will include a bit of faithful disobedience. I had the advantage of having a Latina mother, the daughter of immigrants from Puerto Rico and Spain. My mother converted to Roman Catholicism during the time I was being prepared for First Holy Communion. As a result, we studied the Baltimore Catechism together, memorizing the answers to a litany of questions, e.g., Q: Who made you? A: God made me. Q: Why did God make you? A: God made me to show forth His goodness and to share His everlasting happiness in heaven.

As my mother and I memorized the answers to what seemed to me, as a 6 year old child, a million questions, we would come upon questions which had answers to which we weren’t inclined to assent. In true Latina fashion, my mother’s faith was more concerned with redemption than doctrine, so regarding those questions and answers, my mother would say, “You don’t have to believe that. Just memorize the answer in case the bishop calls on you.”

Early on, therefore, I learned to approach the institutional church with a measure of faithful disobedience. My mother allowed me space to grow into my spiritual maturity over time, in prayerful conversation with God. I was free to prayerfully ponder and explore, rather than simply accept, church doctrines.

Five decades later, and having the benefit of a seminary education (Yea, Sewanee’s right!), I now know that the word we translate as “obey” derives from words in Greek, Hebrew, and Latin that mean “to listen” – but more than that, “obey” in these ancient languages, seeks that we listen AND respond to what we hear. If we are listening for the word or the will of God, then, our obedience calls for our attention followed by some kind response.

This is affirmed for me in my prayer life which has been rich and conversational since my childhood. God has been accessible to me as have the saints, my friends in heaven. As a result, I’ve given great importance to prayer time as part of my every day, even as life got busier and time got shorter. I don’t pray out of duty or fear, though, but from inner divine prompting. God calls to me first. When I call out to God it isn’t so that God might wave a divine wand and fix what I say is broken or wrong (in the way I want it fixed); it’s for God to show me how to be in the will of God as I enter the moment facing me – or the day, or the season. It’s because I’m scared, or I don’t know how to proceed, or I know the voice of my will is drowning out God’s voice. Prayer is one gateway for me to the grace of obedience: hearing and responding to God.

I know that in the frailty of my humanity, I simply can’t see the big picture of my life, my place in the world and in human history – but God can. “For my thoughts are not your thoughts, nor are your ways my ways, says the Lord.” (Isa 55:8) Still, at times, I choose not to obey.

Does my disobedience make God mad? I don’t know. What I do know is this: “God is not wroth” as Julian of Norwich said.* Wrath is a human response to helplessness, disappointment, shame, or humiliation. Each time I set out on a path not of God’s choosing, God gently and very clearly re-routes me. I can repent and be re-routed, or be stubborn and resist. The choice is always mine.

I have noticed, however, that my body responds according to my choice. A felt lack of peace, expressed in my body as tension in my throat or chest, or tightness in my stomach, is present each time I set out in disobedience. Peace and wellbeing are restored in my body each time I relent and trust. This has taught me that my disobedience is: a) known to me; b) not good for me; and c) does not separate me from the love of God for me, just as St. Paul promised. (Ro 8:39)

In the Genesis story, Adam and Eve learned that there were real consequences from their choice to disobey. In the very next verse, however, God sewed clothing for Adam and Eve, covering their shame and humiliation. Then God sent them into the world “knowing good and evil.” (Gen 3:22) We know good and evil, and we know when we are choosing to disobey, no matter how well we’ve justified or defended our choice. We know.

We also know that forgiveness is ours for the asking. As the prophet Isaiah says, “let the wicked forsake their way, and the unrighteous their thoughts; let them return to the LORD, that he may have mercy on them, and to our God, for he will abundantly pardon.” (Isa 55:7) In case anyone doubts that could be true – and many of us do doubt the lavishness of God’s love for us – Jesus made clear that his sacrifice was for our forgiveness: “Then, he took a cup, and after giving thanks, he gave it to them, saying, ‘Drink from it, all of you; for this is my blood of the new covenant, which is poured out for many for the forgiveness of sins.” (Mt 26:27)

As long as we live, we will have to reckon with the voice of the tempter, but the steadfast love of God will gently, clearly, and always guide us back to the path of life. Our choice and our challenge is to obey.

Email ThisBlogThis!Share to TwitterShare to FacebookShare to Pinterest
Labels: Reflections