If the above player doesn't work on your device, click HERE. 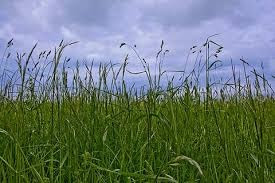 Last week, in my sermon about the Parable of the Sower, I talked about there being no waste in God’s economy. Regardless of where they were sown, all of the seeds in that parable were sown by the Sower, God, who values them and has a divine purpose for them. Our role as followers of Christ is to open our hearts to that reality and to the revelation it provides us.

Today’s parable of the wheat in the fields, a.k.a., the wheat and the weeds and the wheat and the tares, continues that theme. A farmer plants seeds in his field. Under the cover of darkness, an enemy plants weeds in that field, and it isn’t until the plants begin to grow that this is revealed.

The experienced field hands know that the logical thing to do would be to pull out the weeds so that they don’t steal soil space and nutrients from the grain. But Jesus’ parable, like all parables, surprises. The farmer instructs his field hands to leave the wheat and the weeds alone, letting them grow together. At harvest time, they will be separated by the reapers (not the field hands) and dealt with according to the will of the farmer.

You can almost hear the field hands saying: that makes no sense! We know what we’re doing! But remember, this is a parable, and it’s meant to convey a spiritual point, one Jesus wanted us all to hear.

My concern with this parable is that the spiritual point Jesus is making is often lost to a word and a phrase in the story, so let’s deal with those first. The word is: “devil” also translated as “satan” and the phrase is: “throw them into the furnace of fire where there will be weeping and gnashing of teeth.”

I grew up hearing this parable twisted into a threat of hellfire and brimstone. It isn’t, and the fact that it’s been used that way so for so long, and continues to be used that way, is a sin from which the church (meaning us) must repent.

In her book, “The Origin of Satan,” theologian Elaine Pagels teaches us this: (read from the book, pp 39, 40)… That’s how the idea of 'satan' started.

Now to the phrase most people think is talking about hell… that phrase, “they will throw them into the furnace of fire where there will be weeping and gnashing of teeth”… you need to know that neither Jesus nor his religion or culture at that time had any concept of hell that resembled ours. Ours was born from art and literature, specifically Dante’s Inferno and the 9 Circles of Hell. It was art – not science or theology, yet his images moved us so much, many took them as truth and continue to do so.

Biblically speaking, to be thrown into the furnace of fire is to be re-made, re-born in God. Fire is a common biblical term for the presence of God. Remember the burning bush, the pillar of fire that guided the people through the wilderness… When people have gone irretrievably off the path of the will of God, God takes them back into God’s self where they get a do-over… reborn, like a phoenix, into something new.

Is there grief? Yes! People grieve loss – even the loss of an identity which is destructive. People also regret their mistakes once they’ve realize how far they have strayed from the path of love and how much destruction their mistakes have caused.

This is why we continually repent and return to God as our Baptismal vows call us to do. Mercifully, God addresses our guilt by doing what God always does – forgive. We are given another chance – a chance to live lives of love.

Jesus told us, over and over and in so many ways, to die to self, yet when we do that we feel like we’re being punished. We aren’t! We’re being redeemed!

Now, having dealt with those two concerns, let’s look at the spiritual message in Jesus’ parable.

When the weeds are separated out, they will be reborn in God because that is the love and mercy of God: to retrieve all that is lost or broken or damaged and redeem it – to bring new life from death.

Our job is to let God be God. In the meantime, we can make ourselves busy by shining like the sun, drawing all who live in darkness to the brilliance of the light that shines from us – the light of Christ. To accomplish that, however, we must open ourselves to God and trust as the Psalmist does: (Read vv 11 and 22)

In that kind of openness, when we invite God in to our restless thoughts and our hearts, we realize that the God whose redemption we seek is already with us – all around us and within us, praying through us, bearing witness through us, as St. Paul says in his letter to the Romans.

How? By praying together in community, absorbing God’s character into our bodies and souls through Holy Eucharist. By intentionally learning the ways God is speaking in the world now – through our bodies, through our circumstances, through one another, and through creation. Everything is a teacher – all of creation conspires with God to bring about the plan of salvation. St. Paul says all creation groans in labor pains, and we are part of that creation!

Here’s what that looks like for us today… We humans have employed practices that have inadvertently done damage to creation: certain ways of mining, farming, pest, and trash management. When those practices have not honored the dignity of creation, creation has let us know – if we have ears to hear and eyes to see. For example, some of our former mining practices taught us about erosion, water pollution, and wildlife pollution. During the Gold Rush certain rivers became polluted with mercury and other heavy metals which poisoned both the fish and the people who consumed them. Mercury in fish remains an issue today in North America, Australia, Europe, Asia, and Africa (in other words, just about everywhere). (Source)

Remember when they sprayed DDT for mosquito control? It was ultimately banned, but not before we suffered consequences including breast and other cancers, nervous system and liver damage, and developmental delays in our babies. But 40 years later, the effects are still with us: 60% of heavy cream, 42% of kale, and 28% of carrots still have DDT breakdown products in them. So do 99% of people tested by the Center for Disease Control. (Source)

Our intentions are mostly good, and we know so much, but not always as much as we think, and it can take years before we understand the big picture. Thankfully, creation, which includes our very bodies, will tell us when we’ve stepped off the path of life.

We can get defensive and greedy or we can get open and willing. Only when we are open and willing can we truly hear and respond when creation is telling us, ‘you veered off the path of life.’

Every lesson, every circumstance, EVERYTHING is a gift from God, who knows what we need and mercifully provides it – even before the cloud of our ignorance has lifted and revealed a greater truth to us.

What if we approach this God, our loving, merciful God, and ask God to heal our brokenness – brokenness we know we have, and brokenness we don’t yet know we have. And what if we actually trusted God’s plan of salvation to make us whole? What if we let God be God. All of us... When I say “we” I mean all of creation, and all of us individually.

What if we actually trusted God’s plan of salvation to make us whole? All of us - the wheat and the weeds. What if we did as Jesus instructed and shone with the glory that is himself within us, leaving the judgment and separation of wheat and weeds to him.

Be open. Be willing. Be patient. Trust in the love and mercy of God. Then we truly will “shine like the sun in the kingdom of our Father.” Amen.