Creation 6: True power is in serving

Note: if the above player does't work on your device, click HERE for an alternative audio format.

Years ago, I was presenting at a conference on domestic violence and sexual assault. Those were often heavy-duty conferences, as you can imagine. 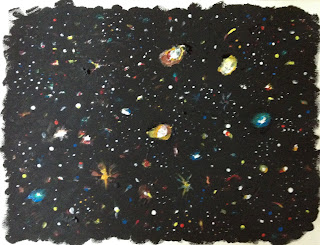 One evening, a bunch of us decided to go onto the roof of our hotel to watch the sunset and restore some peace to our weary souls. We were mostly, but not all, practicing Christians. One among us, an African American woman who, it turns out, was a fabulous gospel singer, told us about her struggle to remain a Christian in light of the hypocrisy among state and federal senators and representatives, judges, law enforcement, church and business leaders who publicly claimed their Christian identity and whose bruised and battered wives and children we had to shelter, and whose abused underlings we had to tend.

Being mostly survivors ourselves, we knew intimately the many prisons in which most of the victims we served were forced to dwell. Telling on their abuser, or leaving them often meant risking their jobs, the custody of their children, an escalation of financial and legal abuse against them, and even their lives – since 75% of women who are killed by their abusers die when they try to leave.

Our discussion that evening was, as you can imagine, intense. Thankfully, so was the sunset. God’s glory was painted across the sky and took our breath away, leaving us in a humble, restorative silence.

Breaking the silence, one woman mentioned that she’d had a similar struggle, and her grandmother suggested that she might try singing Christian hymns replacing the word “Jesus” with the word “freedom” and see what happened. Immediately, the first woman I mentioned stood up and began singing Chris Rice’s “Untitled Hymn (Come to Jesus),” doing exactly that. I still get the chills when I think of it. Here’s how some of it sounded:

Such a wise grandmother.

Abuse, in all its forms, is about power… misused power… This power knowingly harms another for the sake of the one or the few.

The Good News is that God is the only true power; and God’s power is love, creative love, which provides for the benefit of all. When we measure the self-centered power of any human against the other-directed power of divine love, it pales to absurdity. As our psalmist says, when we consider the heavens, the moon and stars set in their courses, we remember what real power is.

In the Genesis reading it seems contradictory that God created humans and told them to subdue the earth and gave us dominion over it. But it’s less contradictory if we remember that true power is love, so to have dominion over the earth is to have the responsibility to supervise the care of what God made; and to subdue is to apply our human gifts to act as God did – bringing order to chaos, the way we would weed and prepare a wild patch for planting, not for our own gain, but for everyone’s benefit, including the earth’s.

Then in our Gospel story, Jesus teaches us about this true power we have and how we are to use it. True power has nothing to do with money, or position, or age, or ability. It’s the power to serve –a power which can only be used properly by someone in right relationship with God and neighbor.

How many times have we walked or driven past a panhandler and ignored their plea for help? We may soothe our consciences saying they are addicts and they won’t buy food anyway, or that they choose to be homeless and beg rather than work; and we won’t support their dysfunction.

The truth is, we often judge them rather than enter into relationship with them. The reason is, we know that once we respond to them, we enter into their reality. There are no quick or simple fixes and in order to truly serve them, we can’t ignore the systems that hold them prisoner. As Dietrich Bonhoeffer said, “We are not to simply bandage the wounds of victims beneath the wheels of injustice, we are to drive a spoke into the wheel itself.”

Just look how the recent revelations from Hollywood and politics are calling us to respond to the women who’ve found the freedom to speak their truths and finally tell on their abusers – powerful men, some of whom we truly love and admire. The system itself is under fire and, thanks be to God, because transformation of the whole system may finally happen.

Laws meant to restrain our propensity to do long-term harm to our environment in order to enjoy short-term financial gain for a few are being rolled back. This represents a shirking of our divine responsibility for creation and a misuse of our power; and it is not good.

Nelson Mandela once said, "…to be free is not merely to cast off one's chains, but to live in a way that respects and enhances the freedom of others." This is hard work and we can’t do it alone. Thanks be to God, we don’t have to – for we live as the body of Christ, and we gather each Sunday to be nourished by Word and Sacrament and strengthen our bonds of friendship, in order to enable us to carry out our ministry in the world.

My guess is: it would be nothing short of heaven on earth. Amen.

Note: The image above is an original painting by Valori Mulvey Sherer: "Interstsellar space" © 2014. Please do not copy or reproduce without permission. Thank you.