Yesterday Steve and I attended the wedding of Paul Ulrich and Cayla DeLuca in Asheville. Y’all know Paul as a one-time baby Jesus in a Christmas pageant long, long ago. I had the privilege of providing Paul and Cayla the premarital counseling required by the Episcopal Church prior to the sacramental rite of marriage. In our discussions, we went deeply into the difference between how the world views and lives out love and marriage and how we, as Christians, do that – and it’s a big difference. 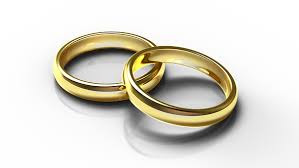 The bottom line for us is that in this sacramental rite, two lives become one, united together by the grace of God for the mutual joy of the couple and to witness God’s love to the world by their relationship. A marriage demonstrates how this union in God works. Two distinct people, who remain distinct in the relationship, choose to live as one for the rest of their lives in the unifying love of God, by the grace of God.

This is the difference between unity and uniformity. The love of God doesn’t obliterate difference, it celebrates it, completes it by joining one to another in a synergistic union where both are greater together than either is alone.

This is why marriage is a commonly used metaphor in Scripture: because it demonstrates how the path of redemption works, a path where two are made one in the love of God: two people, two nations, two ideologies, two anything.

As Jesus’ disciples in the world today, we are witnesses of God’s unifying love. We do this by the way we live our lives and by our witness, that is, the words we use in response to the world, especially when it fails to love.

Today’s gospel story picks up just after Jesus has gone to the synagogue, picked up the scroll of Isaiah and read from it. As his hometown people heard him read and teach, they found his words to be full of grace.

But then they began to think about that. You can almost hear them… Wait a minute! That’s Mary and Joseph’s son! How does he teach so wonderfully? How did he do those amazing things we heard about him doing in Capernaum? Do those things here too, Jesus. Amaze us too! But Jesus knew he could do no healings there because of their unbelief.

Instead, Jesus shared the truth that the salvation of God was for the whole world, that the two groups they had traditionally known – Israelites and the Gentiles - would be made one in God’s unifying love. He also knew this truth would make them mad – and in fact, Luke tells us they were enraged by it.

Why? What made them so mad?

Jesus says to his homies in the synagogue: “…the truth is, there were many widows in Israel in the time of Elijah, when … there was a severe famine over all the land; yet Elijah was sent to none of them except to a widow at Zarephath in Sidon. There were also many lepers in Israel in the time of the prophet Elisha, and none of them was cleansed except Naaman the Syrian."

Both the widow (notice she has no name) and Naaman were outsiders, Gentiles, and unclean in some of the most obvious ways. The widow was from Phoenicia, the center of pagan worship at the time. Jesus is referring to the time when Jews and Gentiles alike were dying in droves due to famine. In fact, the widow’s only son had just died leaving her a poor beggar who would probably die soon after her son’s funeral. It was this outsider - this pagan, Gentile, homeless woman, whom God chose to save.

And Naaman was a Syrian, a Gentile, who had leprosy which Jews believed was a curse due to some sin in them or in their family. There were Jewish and Gentile lepers suffering all over Israel, but the one whom God chose to heal and restore to fullness of life, was the Gentile.

Jesus words shocked his listeners. Here they were feeling so proud of their hometown boy-made-good. His reputation was grand, his words so gracious.

But now, instead of dazzling them with amazing works of power, Jesus insults them and calls them to bring down a wall that had separated them from others for generations. St. Luke says they were so “filled them with rage” that they tried to “hurl” Jesus off a cliff!

We live in a time when God’s own people, as so many groups define themselves, are full of rage over the notion that God might unify us to outsiders, and I wonder… where is the love?

When I’m on social media listening to “Christians” respond to events in the world or in the church I’m often not seeing love that is patient and kind or words that aren’t arrogant or rude. The love I’m seeing witnessed by “Christians” is often not willing to bear or endure much of anything at all, especially challenges to what they believe or what they’ve always done. And if I’m not seeing it, then neither is the one who is outside of us looking in: the unbeliever, the unchurched, the ‘none.’

The modern reality of social media makes prophets of all of us who use it, like it or not. So, what is our witness on social media?

Our churches are meant to be communities in which a person can learn and practice love so that they can be sent forth as witnesses of the unifying love of God to the world – by their words but also by the way they live their lives. Our churches are places where we can piece ourselves back together when the world gets mad at us for witnessing this unifying divine love – because it will get mad at us. There will be times people will want to hurl us off a cliff.

We might lose the affection of friends or family when we welcome the outsider or point out a division they prefer not to see. We will definitely feel insecure about ourselves and our ability to speak the truth of God’s unifying love, especially when the world is raging at us about it, trying to enforce the divisions it prefers; divisions that serve them or are comfortable for them.

Our comfort, however, is found in each other and in our Scripture. When God called Jeremiah to speak the truth to the people he begged off saying, I can’t do that. I’m only a boy (in other words, I’m not educated or experienced in this).

But God’s words to Jeremiah are for us also: ‘…you shall go to all to whom I send you, and you shall speak whatever I give you authority to say. Don’t be afraid of them, for I am with you to deliver you.’

Notice God doesn’t promise that all will go wonderfully but that God will be with us to deliver us just as Jesus was delivered when he faced the rage of his homies at the synagogue, passing through the midst of them and going on his way.

This gives us hope for our time. Wherever there are people divided within the church or in the world, whether by expectations, power, ideology, race, gender or sexual identity, belief, politics (pick a category), we are called to witness the unifying love of God – even knowing they may want to throw us off a cliff in response. Despite that, we continue undaunted for we are journeying with Jesus on the path of redemption as witnesses of the unifying love of God by the grace of God.

Hello Pastor Rev.,Dr. Valori Sherer. I am also a Pastor from Mumbai, India. I am glad to stop by your profile on the blogger and the blog post. I am also blessed and feel privileged and honoured to get connected with you as well as know you as a Pastor. I am blessed by your message on your blog post on "The Unifying love of God". I did enjoy going through it.I love getting connected with the people of God around the globe to be encouraged, strengthened and praying for one another. I have been in the Pastoral ministry for last 39 yrs in this great city of Mumbai a city with a great contrast where richest of rich and the poorest of poor live. We reach out to the poorest of poor with the love of Christ to bring healing to the brokenhearted. We also encourage young and the adults from the west to come to Mumbai to work with us during their vacation time. We would love to have young people from your church to come to Mumbai to work with us during their vacation time. I am sure they will have a life changing experience. My email id is: dhwankhede(at)gmail(dot)com and my name is Diwakar Wankhede. Looking forward to hear from you very soon. God's richest blessings on you, your family and friends.