Note: if the above player doesn't work on your device, click HERE for an mp3 audio format.

I hate to break it to you, but do you realize we’ve just invited God to make daily visitations to us? In our Collect, we prayed: Purify our conscience, Almighty God, by your daily visitation…

In my experience and from what I read in Scripture, God doesn’t barge in uninvited. God’s love for us is way too respectful for that. But God does hear and answer prayer, and since we’ve all just asked God to visit us daily, we believe that God will do it. Our task now is to notice when God shows up and notice what happens, in us and in the world, as a result - because something will surely happen! Are you ready for it? 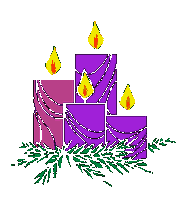 Here’s an example of what happens when God makes visitations: the Angel Gabriel is sent to ask Mary if she would bear the Christ to the world. She could have said no, but in the presence of heaven broken through to earth, in the presence of the overwhelming love, affirmation, and care of God, how could anyone want to say no?

In today’s gospel, God visits Joseph in a dream, calls him by name, and tells him not to be afraid to take Mary as his wife, that she has been faithful to him. The child she is carrying was from the Holy Spirit, as had been prophesied.

Joseph could have said no. But in the presence of God who speaks to him in a dream, calls him by name, and quotes Scripture to him, how hard would it have been for Joseph to say, No, God. This isn’t for me.

The experience of a single visitation from God, much less a daily one, would be so powerful, so exiting, so motivating that anything would seem possible, any risk worth taking, any price worth paying because the Creator of the universe is there with you.

The price Joseph was being asked to pay was huge. He was being asked to receive into his home and his care one whom society insists “good people” should reject. Nobody around their tiny town would know that Mary came up pregnant by the Holy Spirit. They’d have done what folks usually do – put the pieces together in a way that makes sense to them.

Mary and Joseph are engaged, but not living together yet and Mary turns up pregnant. The obvious conclusion is that someone besides Joseph got to her. Since the Holy Spirit isn’t an obvious first choice for explanation, the one that fits is that it was some other man – making Mary an adulterer and Joseph a fool.

The law gave Joseph the right to have Mary stoned to death for being adulterous. He must have been a really sweet guy, though, because his inclination was to just “dismiss her quietly,” and dissolve their marriage contract. That would have spared Mary’s life, but it also would have destined her and her child to a lifetime of poverty, and shame.

In order to take Mary who is pregnant into his care, Joseph has to put his own reputation aside because a man with an unfaithful wife would have been openly scorned by the “good people” in his village. Yet, when Joseph awoke from his sleep, “he did as the angel of God [had] commanded him.” He walked forward in faith, letting go of his own plan for his future. Joseph willingly sacrificed his reputation and committed to quietly endure whatever judgments were made against him by his own friends, family, and community.

Joseph could have said to himself, ‘God doesn’t speak to someone like me.’ Or he might have reasoned that God wouldn’t ask him to violate the laws God gave his people. He could have written off the whole thing as nothing more than a delusion. But he doesn’t. When he awakens, Joseph does as he was commanded to do – as strange and uncomfortable as that was.

Joseph continued living quietly as he had done before. He married Mary and raised Jesus as his own son.

Joseph couldn’t have known how God would redeem all of this for him, he simply trusted in God, recognizing that there was a much bigger plan in play and his concerns about his own and Mary’s reputations just didn’t matter much anymore because God was being made known in a new way and Joseph was asked to help make it so. Joseph’s ‘yes’ to God was just as important in bearing the light of Christ to the world as Mary’s ‘yes’ to God was. That’s an honor that far outweighs any earthly judgments or achievements, which suddenly seem so small and inconsequential.

Joseph’s willingness to respond to God’s visitation to him stands in sharp contrast to Ahaz in the story from Isaiah. Ahaz clings so tightly to the law in Deuteronomy (the one that says, “Do not put the Lord your God to the test” 6:6) that he can’t release his grip on what he believes and what he’s always done, even when God asks it of him. In this story, God is ready to act. God is asking Ahaz to open a new way for God to be made known, but Ahaz just can’t do it.

We’re not so different from Ahaz sometimes. We often cling to what we feel comfortable believing and doing.

Yet, God continues to visit us and call us out of our sense of comfort, beyond what we think, believe and usually do, into new ways of living in holiness and righteousness. Any church in transition can attest to that, right?

Daily visitations from God will most assuredly lead us to discover ever new ways of making God known in the world, but we must be willing to be like Joseph and walk forward in faith, letting go our own plans for the future, and committing to do what God asks of us, even when there may be a price to pay for it.

As a community we asked God today to purify our conscience, that is to make us one with the inner voice in us which guides us forward – the voice of the Spirit of God who dwells in us. This voice of God within our community leads us forward in the way we are meant to go. This voice bears the command Jesus gave us after his resurrection and before his ascension: bring the good news of our salvation in Jesus Christ to all nations and peoples. We do this by living our lives in such a way that everyone we meet has the opportunity to hear the Good News, see the living God in us, and come to believe.

St. Paul tells us that we have been prepared to do this, having received grace and apostleship from Jesus Christ in order to make God known to all. This is the Jesus Movement, as our Presiding Bishop calls it, and as the Episcopal branch of the Jesus Movement, we are by definition a gathering of apostles – a people who are sent on a mission.

Did you know that our official name of the Episcopal Church, our legal name, is the Domestic and Foreign Missionary Society? Our continuing mission is to use everything we’ve been given and risk everything we have, so that God can be made known and God’s love can be made manifest through us in new and unprecedented ways.

As we practice our last week of Advent together, I pray that we will listen faithfully and fearlessly to the voice of God within us and respond as Joseph did, with our “yes” as strange and uncomfortable as the path ahead may seem, whatever the price to be paid.