Over the years I’ve learned that if you want to know someone’s true character, notice what flares up their anger. Who are they angry at and why?

In my years working with and advocating for persons subjected to violence and abuse, I witnessed toddler-like tantrums from plenty of adults who simply didn’t get their way and resorted to intimidation to enforce their will - and I’m not just talking about the abusers here, but also law enforcement, lawyers, and judges. Self-interest, power, and control are deeply rooted temptations for us humans, and the more we think we have power, the more we think we deserve it, and the less willing we are to let it go. 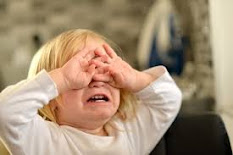 I’ve also seen my share of actual toddlers melting down as they learn the hard lessons that they aren’t the center of the universe and the world isn’t going to serve their every whim. At least that’s apposite for the toddlers. Can’t say the same for the adults…

In today’s gospel, Jesus pitches the only angry fit recorded in the gospels. This was no toddler-fit. It was righteous anger. Who was Jesus angry at and why?

A little background might help. The setting is the temple in Jerusalem, which was a huge complex, and the time is the feast of the Passover in spring. Thousands of worshippers have traveled to Jerusalem on spiritual pilgrimage to offer their sacrifice at the temple. The deluge of pilgrims strained local resources that had to house, feed, and clean up after them.

In order to make their temple sacrifice, people first had to exchange their Roman money for Jewish money – and the exchanges weren’t always done fairly. In addition, most of the sacrificial animals, even the cheaper birds, were too expensive for regular folk, but the religious leadership had convinced them that unless they bought and offered an animal for sacrifice, they couldn’t participate in worship and their prayers would go unheard by God.

Typically, the money changers, sacrificial animals, and merchandisers would have been 13 miles away in the Kidron Valley, but in our story, they are in the temple precincts, most likely in the Court of the Gentiles. It is believed that Caiaphas, the high priest, had permitted his supporters to move their stalls to the temple as a way of garnering their support while asserting power over his rivals in the Sanhedrin.

It’s a good bet that a lot of people were offended by the presence of the animals and merchants in the temple. Imagine trying to worship in the presence of the smell and sounds of the animals, while merchants are barking out their deals – not to mention the money changers fleecing hapless believers within earshot – all in the habitation of the Holy. (Source: Dick Donovan commentary) 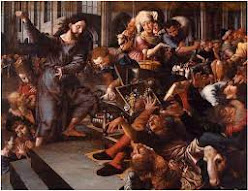 Observing all of this, Jesus is moved to act. He fashions a whip to get everything and everyone out of “his father’s house.” The gospel says Jesus “drove” them out, using the same word for those times Jesus expelled demons. It’s a spiritually weighty word.

The exploitation of the poor and their cruel exclusion from communal worship unless they lined the pockets of the rich was so far off the path of righteousness that Jesus fairly exploded with anger at the self-serving exploiters, who also happened to be the religious leadership.

Why was he mad? Because they were throwing obstacles on the path for God’s people. Remembering what we said last week, that the literal meaning of “the satan” is “one who throws an obstacle across one’s path,” Jesus is making clear that the religious leadership were “satan” in that moment. Their eyes were on earthly, not divine things and it led them to insolence in the house of God and maltreatment of God’s people.

By his tantrum, Jesus reveals to us his true character and ours. Jesus is a fierce protector of the vulnerable people of God who was consumed by a zeal for the house of God. He also showed us, by contrast, that even when we are trying to be faithful, we can slip into self-serving behaviors or become complicit in the self-serving behaviors of others that harm many while serving only a few.

The merchants in our gospel story, for example, were only trying to make a living in hard times, and besides, a portion of the money they raised went to serve the church – so it’s all good, right? Wrong. These merchants were complicit in a system that was harming the many while serving an elite few. Their choice to manipulate their own reward from that exploitative system was their presumptuous sin.

The systems in our world that create and perpetuate harm to the many while serving the few are no secret to God, and no matter how we justify them or our participation in them, they are our presumptuous sins. Sins like racism, classism, sexism, and the other ~isms we’ve been discussing all year Once these sinful systems are put in place, they become accepted, then habit, then tradition. In the end, however, they are simply “the satan” and our response must be to remove those obstacles from the path of God – even if the obstacle is us.

Lent is the season we take the risk of allowing ourselves to see our own presumptuous sins individually and collectively, then respond to them. They are there, of course they are, because we aren’t perfected yet, but God isn’t finished with us either, and God continually chooses us to be removers of the obstacles on the path of the love of God.

Living out our baptismal vows is serious business and can feel arduous or unfair at times, especially in a world where leisure seems like the treasured reward – and people who don’t work for it seem to have the most of it! But we have a different goal. Our goal isn’t to live an easy life or a leisurely life. Our goal is to live a faithful life. That may look like foolishness to someone who is not on God’s path of love, but we’re in good company. 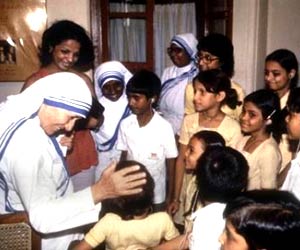 Mother Theresa of Calcutta and the sisters of the order she founded, the Missionaries of Charity, spent their lives and all of their resources serving the most despised, wretchedly poor, and outcast in India. The sisters successfully dispelled the darkness of those they served, enabling them to die knowing they were treasured by God and by the sisters.

So faithful was their approach that they became icons of loving service to the world. This tiny woman, and her band of faithful sisters in Christ, worked some powerful love into the world. Their story illustrates for us that when we let the strength of divinity perfect - that is complete - our humanity, we are transformed and we become instruments of transformation in the world.

As we enter our third week in Lent, I pray we wait through the discomfort of looking courageously at our presumptuous sins and commit ourselves fully to our loving God who is already working to perfect us, prepare us, and transform us so that we can transform the world in God’s holy name. Amen.