Pentecost 2021-B: Love declared and shared

En el nombre del Dios: padre, hijo, y espiritu santo. Amen.
The Episcopal Church has seven Principal Feasts, and today is one of them, which is why we transfer it from Thursday, if we don’t celebrate it on that day, to Sunday. It’s a date the church wants us to notice and celebrate together.
Of the seven Principal Feasts, four are about God: Jesus’ birth at Christmas, his resurrection at Easter, his Ascension, and the nature of the triune God on Trinity Sunday. Two of them, All Saints and Epiphany, focus on us humans.
Pentecost is both. Today we celebrate the moment the Holy Spirit entered the mortal bodies of Jesus’ disciples, the first instance of how Jesus would continue his ministry of reconciliation: through us, his followers. It’s an amazing reality when you think about it. 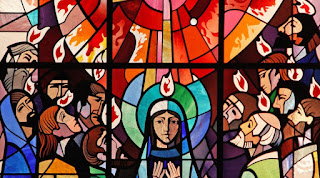 The disciples were gathered together when suddenly they heard a sound like the rush of wind. Tongues of fire appeared and divided over them, resting upon each one of them, and they began to speak in all kinds of languages. As amazed as the disciples were by what was happening, the people outside, Jews from many nations, were perplexed. How are these Galileans suddenly able to speak in our native tongues? How indeed.
Years ago, I was a chaplain on the oncology/hematology unit of a regional hospital in south GA. One day I sat at the bedside of an elderly man, Rufus, who was dying of cancer. Rufus had no teeth and spoke with a very thick southern accent that I found nearly impossible to understand.
As he spoke, I could hear enough to know he was telling me his life story as many dying patients did. He had a 3rd grade education, something about his sisters and his grandmother… and the death of his parents when he was very young.
There I was, knowing how important it was for me to hear this man’s final words, yet feeling helpless and frustrated because I just couldn’t understand him. “Lord, give me Pentecost ears” I cried silently in prayer. “Open my ears to understand him – and hurry!”
Just as I finished praying, I literally heard what sounded like a rush of wind. My ears felt like they popped, the way they do when you’re in an airplane and they adjust to the change in pressure.
And suddenly, the man’s voice was as clear as a bell. He was talking about meeting the woman who became his wife just before he shipped off to Europe in WWII. He told me about his children, how his heart broke when his son went to prison and the joy his grandchildren and great-grandchildren brought to his life.
As he spoke, part of me was marveling at the fact that I could actually understand him. Another part of me was aware that we were experiencing a miraculous moment, a moment full of the power of the Holy Spirit.
When Rufus finished speaking, he wanted to rest, so I told him I’d sit nearby and read the Psalms to him. As he slept, I looked at this weathered, toothless, 90-something-year-old man, whose great-grandparents were slaves, and I realized, he felt in my heart like family. Though he died only 6 hours after I’d met him, I will always cherish my memory of Rufus and the Pentecost moment we shared.
The power that came upon those gathered at that first Pentecost, the power that unified Rufus and me, is the same power that comes upon us today. As Dr. Martin Luther King, Jr said in his 1967 speech to the Southern Christian Leadership Conference: “Power at its best is love… implementing the demands of justice, and justice at its best is love correcting everything that stands against love.” 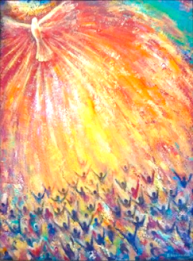 O Lord, awaken the consciousness of all peoples and their leaders; raise up men and women full of love and generosity who can speak and act for peace, and show us new ways in which hatred can be left behind, wounds can be healed, and unity can be restored. (Source: A Cry for Mercy)
On this feast of Pentecost, we are reminded that what matters is that we are united with God in Christ who dwells in us. As followers of Jesus and bearers of his Spirit in the world, our response is to be present to God and one another in such a way that God’s powerful love in us is declared and shared by us for the benefit of all. God will show us new ways to do this as we continue our shared ministry of reconciliation until the whole world is “restored to unity with God and each other in Christ.” (The Catechism, BCP, 855) Amen.
Posted by Rev. Dr. Valori Mulvey Sherer at 5:30 AM