In today’s gospel, Mark inserts a flashback on the death of John the Baptizer between the stories of the sending of the twelve disciples on their first mission journey and the story of their return and report from their time out there. It’s a strange insertion in that it is very detailed, right down to the conversation between Herodias and her daughter, whom some believe was Salome.
What was Mark’s purpose? I wasn’t able to find any satisfactory answers from the commentaries, except for the accepted idea that it was to elucidate the cost of being a follower of Jesus. But John wasn’t a follower of Jesus. He preceded Jesus to prepare the way for him.
If I were to posit why Mark inserted this right here, I’d say this flashback also was a foreshadowing of what we who are sent by Jesus will find in the world.
In his time, Jesus’ ministry was growing, and that was making Herod nervous. Jesus was becoming even bigger than John was and John’s success had scared Herod into protecting John. Now Jesus, who was also a righteous and holy man, had a following that was even bigger than John’s and the tetrarch was scared of what that would mean for him.
Mark is also foreshadowing the way the kingdoms of earth and heaven would interface. There are three things we can notice here. First, Mark shows how pride, revenge, power, and politics act when confronting the kingdom of God - and it isn’t pretty. 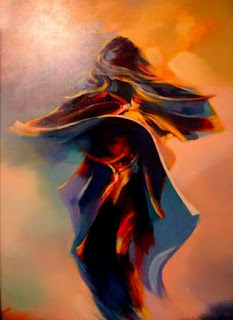 In this story, Herod gets caught up in a party, responding to a child’s dance. It’s important to note that the word used for this child is the same word used for the little girl Jesus raised from the dead saying “Talitha cum” which means she was very young.
This also had incestuous implications since the little girl was Herod’s niece, cousin, and step-daughter. Her father was Herod’s half-brother and her mother was his wife and his cousin. It’s no wonder John had been openly critical.
Then the morally corrupt Herod made an outlandish promise: Ask me for whatever you wish, and I will give it… even half of my kingdom.” When Herodias’ daughter said she wanted John the Baptist’s head, Herod was “deeply grieved.” Revenge is ugly and even the unholy Herod knew it was going to destroy a righteous and holy man, and it wounded whatever soul was in him.
Mark tells us that “out of regard for his oaths” Herod did as Herodias’ daughter asked. I don’t think Herod was as much motivated by honor as by his impotence to respond to circumstances he created while also saving face and whatever life he had left. His wife wanted this, and his people would see him as weak if he backed off, so he ordered John’s execution.
Mark also demonstrates that sometimes it will seem like corrupt leaders are having their way destroying all that is good and fair and righteous. When that happens, Mark shows how we are to respond. When they learned of his beheading, John’s followers “came and took his body, and laid it in a tomb.” They did what was right by the one unjustly murdered, but they did not act violently in response to the violence of the world.
That’s a hard lesson for the followers of Jesus to learn and practice. Innocent people still die at the hands of corrupt and unholy earthly systems. We believe, however, that despite what it looks like at any moment, the plan of God is in place, and God is already acting to redeem all that has gone awry.
That doesn’t mean we sit idly by while God fixes things. On the contrary, we are called to be co-creators with God, partners in God’s continuing work of redemption and reconciliation. Together we can make heaven present on earth in small and big ways.
As the author of the letter to the Ephesians reminds us, we have been lavished with grace, wisdom, and insight by God who, “according to his good pleasure… set forth in Christ a plan.” That plan will happen in God’s time but the goal is plain: “to gather up all things in [Christ], things in heaven and things on earth.” In other words, the reconciliation of the whole world to God. 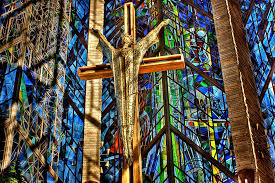 He goes on to say that “we, who… set our hope on Christ” are to “live for the praise of his glory” a phrase he repeats twice. As I read this portion of the letter, I have a picture in my mind of our Presiding Bishop, Michael Curry, stepping out of his pulpit, arms waving, as he pivots first this way then that, dancing and singing, like David did, this hymn of praise, bringing honor to God and to the church.
I’m no ++Michael Curry, but I, too, have a song of praise to share. We all do! Here’s some of the Good News we have to share:
We who set our hope on Christ have been marked and sealed by the Holy Spirit! The blood of Jesus runs through our veins infusing our earthly bodies with divine life. We have been lavished with grace, wisdom, and insight so that we can be co-creators with God, vessels who carry God’s healing love into the world. Our God is a God of mercy who hears the cries of those who suffer, including our animal kin and even the earth itself, and Jesus sends us out now just as he sent those first disciples– with power over unclean spirits.
How do we understand and relate to unclean spirits today? “Unclean” refers to that which is immoral, dishonest, corrupt, or unfair. According to my Greek Bible, “spirit” refers to “That which is recognized by its operations or manifestations, as it is seen in life.” (E.W. Bullinger) 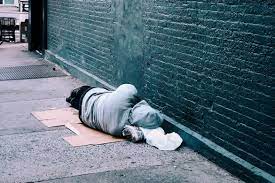 So, where are these unclean spirits in our time?
Here are just a few:
In Columbia and cities across the U.S., we can’t miss the reality of homelessness and the overall neglect of persons suffering from mental illness and PTSD who live on the streets. I regularly see plastic drink bottles filled with urine discarded on our city streets and I wonder… while we seek ways to deal with the larger issue of homelessness, why don’t we at least provide public bathrooms and showers for their basic human needs? 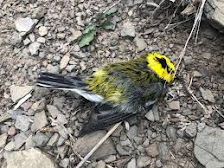 Last week as we celebrated our Independence Day, my Facebook page was covered with pictures of people trying to keep calm their pets who were terrified by the fireworks. My email had been receiving notices for weeks about the damaging effects of fireworks on animal life, especially birds (and y’all know how I love my birds!). I continue to wonder why, if we have silent fireworks, we keep using the ones that sound like bombs going off? We all know the havoc they wreak on our animal kin.
Finally, the U.N. is warning that the number of people worldwide who starve to death each year, about 9 million people, may double due to the pandemic and they’re asking wealthier countries to help. This, while a couple of billionaires vie for the personal victory of being the first to go into space.
Every age has its unclean spirits. Thankfully, we make vows to step in and address those in our time and place. In our sacrament of Baptism, we renounce “the evil powers of this world which corrupt and destroy the creatures of God.” (BCP, 302) An evil power is anything that causes suffering, division, or increased labor on those less powerful than they. The institution of slavery in the US comes to mind, the vestiges of which continue to impact our African American sisters and brothers today.
We also vow to proclaim by word and example the Good News of God in Christ. That gives us so much latitude to be who God made us to be, individually and collectively, and to lavish on those around us: people, animal kin, and even the earth itself, the graces God has already lavished on us.
We can make an impact on how the kingdoms of heaven and earth interface today in small and big ways. As individuals and as a church, all we need to do is continually call upon God that we “may know and understand what things [we] ought to do, and… have grace and power faithfully to accomplish them.”
I close with this prayer from our Confirmation Rite:

“Almighty God, we thank you that by the death and resurrection of your Son Jesus Christ you have overcome sin and brought us to yourself, and that by the sealing of your Holy Spirit you have bound us to your service… Send us forth in the power of the Spirit to perform the service you set before us; through Jesus Christ your Son our Lord, who lives and reigns with you and the Holy Spirit, one God, now and for ever. Amen.” (BCP, 309, adapted)
Posted by Rev. Dr. Valori Mulvey Sherer at 2:54 PM