I grew up with 3 sisters, 17 first cousins, and a slew of what we called non-bloods, who were like family, but not biologically related. In addition, there were our aunts, uncles, second cousins, grandparents and great-grandparents. Since our families were from tight-knit ethnic neighborhoods in NYC we saw these extended families often. 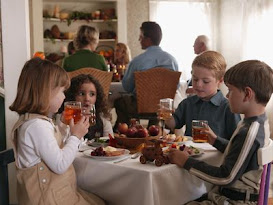 Depending on who was hosting the gathering, the kids either ate with the adults at the main dining table or had a separate table set up in the living room. At my Puerto Rican family’s houses “the kids’ table” was a blast! We could cut up, relax, be silly, and enjoy our segregation from the adults – who were laughing like crazy at their own table. We loved it.

My Irish family were wound a bit tighter. When you walked into my Dad’s eldest sister’s house, for example, there was plastic on all the furniture and she hovered nearby constantly cleaning up around you every time you moved. The kids didn’t speak unless spoken to, didn’t make a mess, and didn’t have fun. At dinner we were segregated to “the kids’ table” but the message was different: that we were the low-ranking members of the clan and the main table was for the high-ranking members.

This is where I learned the absurdity of classism. I was the same person but treated vastly differently by the two sides of my family.

I also learned about racism during my childhood, since the Irish half of my family openly despised the Puerto Rican half of my identity, calling my mother racist slurs at just about every opportunity while trying to persuade me to own only my Irish identity – “the only one that matters,” they would say.

My Puerto Rican family wasn’t free of racism either. From them, I learned a whole hierarchical structure of which Latino countries were at the top of the ladder of respect and which were at the bottom. My grandmother’s indigenous background put her near the bottom of that hierarchy, a fact that was used to abuse and oppress her during her lifetime.

So, at this point in my life, I have little patience for anyone who applies absurd distinctions meant to separate and diminish some in favor of others. It remains a favorite practice in modern culture, so we’re as much in need of a shift in perspective now as Jesus’ disciples were in today’s Gospel where Jesus is laying the groundwork for the birth of servanthood.

It’s interesting to note that the word translated as “child” also means “servant” so whoever welcomes the servant, welcomes God who sent him. Jesus confirms this shift in perspective later in Mark’s gospel,saying, “…the Son of Man came not to be served but to serve.” (Mk 10:45) Jesus is the servant of all, the suffering servant prophesied in Isaiah, who calls us to love one another as he loved us and to serve one another as he served us.

The timing of this lesson from Jesus is important. Jesus and the disciples are back in Capernaum, Jesus’s hometown, and the house they’re in is probably Peter’s, so the child is likely someone in Peter’s family.

Jesus has completed the last of his healing ministry and is focusing now on preparing the disciples for his entry into Jerusalem where he will be betrayed, abused, and ultimately murdered. This is the second of three times Jesus tells his disciples about the path that lies ahead of them, the path of the suffering servant. Something new in this second time is the notion of him being betrayed.

Jesus is speaking in the third person, however, so it’s easy to understand why the disciples might be a bit unsure of what Jesus is saying will happen and to whom. Jesus has referred to himself frequently as the Son of Man, but the disciples also would have been familiar with the term “son of man” since it appears in the Torah hundreds of times.

For Christians, this term is understood as representing Jesus and the fullness of his humanity. For his disciples, however, this name was not yet connected to Jesus. 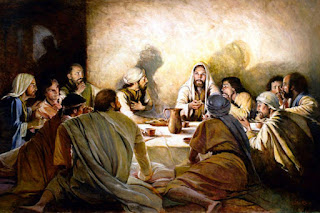 Since Jesus has already smacked down his #1, Peter, pretty hard for decrying the path he is describing to them, the others decide to stay silent. But Jesus isn’t letting them off the hook. He asks them what they were arguing about as they walked to Peter’s house.

You can almost see their eyes widen as glances shoot back and forth among them. They had to know they were busted, so what do they do now?

In keeping with his ministry of love and spiritual development, Jesus takes the opportunity to teach them what they and the future church dedicated to him will need to live in the world he’s about to die to save: servanthood. “Whoever wants to be first must be last of all and servant of all.”

In my years serving as a priest, I have seen the beauty of this when it is lived out and the tragedy of it when it is not. As the letter from James points out, when we are operating from wisdom, which as we said last week, isn’t about knowledge as much as being in intimate relationship with God, the fruits of our works will be good and peaceable, absent of partiality or hypocrisy.

The tell-tale sign of moving off the path of faith and truth is that conflicts and disputes will arise. When they do, the only faithful response is to “submit to God” as James says in his letter, to draw near to God who will draw near to us and restore our wisdom, our peace, and our path.

What I love about this gospel story is the way Jesus acted so gently with his disciples who didn’t get it, were afraid to ask about it, and were about to have to deal with it without him. Jesus was brutally honest in his prophecy about his own suffering and death. I’m sure he knew how hard it was for his followers to shift from their expectation of Messiah to Jesus’ embodiment of it; from their life-long goal of taking the seat of power to Jesus’ command to be last of all. 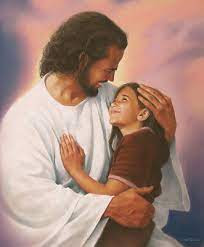 So he takes a child, embraces it, and invites his disciples to do the same. What a homey example of divine presence. Children may have been without rank, power, and prestige in ancient Jewish culture, but they were much loved and valued.

It’s not so different today. Whose heart isn’t warmed and broken open by the innocence and guilelessness of a child?

Jesus, who would have noticed that he’d silenced his disciples with this smack-down of Peter, takes a different approach this time, a gentler one. By sitting down Jesus takes the familiar posture of a rabbi who is about to teach. This helps diminish his disciples’ anxiety because they know what to expect.

Rather than scolding them for engaging in absurd distinctions meant to separate and diminish some in favor of others, Jesus takes and embraces a child, connecting the qualities of that child to his teaching. By doing this, Jesus reaches beyond knowledge to the experience of love: his core message.

It’s hard to shift from the habits of our thinking, especially when the world affirms them so strongly. We won’t always get it right or get it quickly, but Jesus will stick with us, gently showing us the way to go.

Let us pray… Loving Jesus, pour your grace over us so that each one of us, and all of us together, may feel the warmth of your love filling us to overflowing. Then send us out on the path of faith you have set before us that we may serve faithfully, peaceably, and without a trace of partiality. In your holy name we pray. Amen.