Lectionary: 1 Kings 19:1-4, (5-7), 8-15a; Psalm 42 and 43; Galatians 3:23-29; Luke 8:26-39
En el nombre del Dios que es Trinidad en unidad. Amen.
I confess that I have a complicated relationship with St. Paul, as many Christian women do. However, the particular part of Paul’s letter to the Galatians we read today is, in my opinion, one of his best, most inspired and inspiring teachings: that “in Christ Jesus [we] are all children of God through faith …There is no longer Jew or Greek, there is no longer slave or free, there is no longer male and female; … all of [us] are one in Christ Jesus.”
I hear something like this pretty regularly, and I hear it as the voice of God speaking within us, and it sounds like this: Why can’t we all just get along? Why is it so hard to understand that people are people? We’re all the same – just trying to live our lives and take care of our families. 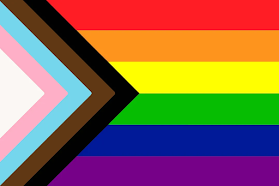 We have to find a different way to live together. We have to do better than this.
In his letter, St. Paul is addressing the historic divide between Jews and Gentiles who are now becoming members of the nascent Christian community: do Gentile followers of Jesus have to follow Jewish law? Paul responds that all of us are one in Christ Jesus, so nothing divides us anymore.
This isn’t an easy transition to make. We, and by that, I mean humanity, continue to fall back into the confinement of division, even codifying it into laws, generation after generation, country after country.
But we, who are followers of the Way of Jesus, are called to live differently. We are called to be reconciled to God in Christ and to one another, remembering that it is only by being reconciled to God in Christ that we can live in peace and unity with one another.
The gospel demonstrates this with an amazing story rich in symbolic language. In this story, Jesus goes to a place which is opposite of Galilee - opposite not just in location, but also in religion. Gerasa is a Gentile country. 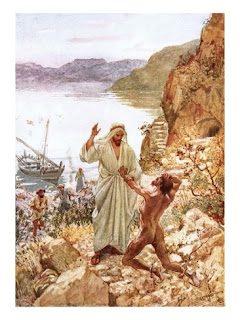 There he comes upon a man whose description leads us to believe that he was probably mentally ill. His behavior so frightens the local community that they tied him up and put a guard on him to keep him away from them, but he regularly escapes his chains (which symbolizes sin) and escapes to the wilderness – a powerfully symbolic word for the place where we encounter God who leads us to new life.
The man is forced to live on the margins of society, stripped of his freedom and enslaved by evil, which is what his nakedness symbolizes. He was scary, strange, and to be avoided.
But Jesus doesn’t turn away when he sees this untamed person. He approaches him, and remarkably, asks his name. Names are powerful symbols in ancient Jewish culture, expressing the essential nature of a person. This man called himself “Legion” a military word that symbolizes that he has lost his true identity and is controlled by powerful, destructive forces within himself. It also refers to the Roman legions that were controlling and destroying the Israelite people.
Like the demoniac, we are Legion too – and by we, I mean humanity. There are many powerful, destructive forces that control us from within and lead us to need automatic weapons of war to feel safe in the grocery store, or to shoot African Americans in prayer, or gay siblings and allies dancing at a bar, or churchgoers sharing a meal.
As the story proceeds, the demons within this man are sent into a herd of swine which run off a cliff and drown. It’s important to remember that although Jewish culture found pigs to be abhorrent, this isn’t a story about animal cruelty or the loss of livelihood of the owners of the pigs.
Let’s think about where else we hear about drowning. I’ll give you a hint – it’s a kind of important milestone for us Christians. In Baptism we are drowned into the death of Christ to be raised into the life of Christ.
Once this man is freed from his chains and the forces of destruction within him, he is healed, and it happened in a very Baptismal way. The swineherds who witnessed this ran off to tell everyone else what they saw. When the people came and saw the man sitting there with Jesus, “clothed and in his right mind” they were “seized with fear.” 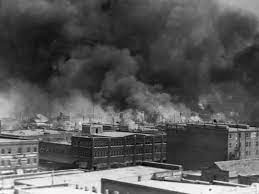 Isn’t that a strange response? Maybe, but it’s not uncommon. In 1921, when we saw African Americans thriving in their newfound freedom in what was called “Black Wall Street” we massacred them and burned their city.
When healing happens, the system around the one healed tends to try to force them back into the way it used to be so they can continue on as before – even though that way was destructive to them.
This is something taught to recovering alcoholics and survivors of domestic violence. I used to use the visual example of a baby’s crib mobile. It spins well while everyone is in their place. If one person leaves the system that exists, however, the mobile tilts and can’t spin like it did and the dysfunctional system is disrupted.
In the gospel story, the people wanted Jesus to leave. He was disrupting their system.
The healed man wanted to go with Jesus – who wouldn’t? But Jesus sent him away. If that seems cruel, hold on. There’s a purpose to it.
Jesus sent the man home to declare - which translates as “to show” - what the love of God has done for him. This is a powerful part of the story.
This formerly untamed, scary, naked, chain-bound man was sent by Jesus to share his good news of reconciliation to God and his community. This man was an apostle – sent by Jesus – before Mary Magdalene witnessed the resurrection that first Easter, before the disciples’ Pentecost experience.
The first apostle was a formerly mentally ill, demon-possessed Gentile. How’s that for a God twist?
The gospel tells us that the man did as Jesus commanded him. He went home “proclaiming throughout the city how much Jesus had done for him.” We don’t know what happened in the long term, and that’s part of the lesson for us. 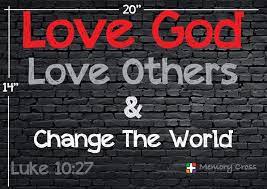 We do as we are commanded: we love God and one another as Jesus loved us. God does the rest in God’s time. God’s plan of redeeming, reconciling love isn’t ours to accomplish but to participate in, to foster.
We are lavish planters of the seeds of divine love. God does the growing and the harvesting – which we may or may not see in our earthly lives. We don’t lose hope because our hope is in Jesus; and we don’t lose patience because we trust in God’s inclusive plan of love and we, too, don’t want anyone, not even a hate-filled shooter, left out or lost.
I close with a prayer from enfleshed.com. Let us pray.
In the image of God, you created everything and called it good! In abundant diversity, your likeness is found in us. We reject all messages that belittle or degrade any among us. And so in faithfulness to God and one another we proclaim: Sacred are our bodies of every size and ability. Blessed are our sexualities, drawing us towards love of many kinds. Beloved is every gender, revealing you in different ways. To our skin, beautiful in every shade, we say hallelujah! Praise God, our Creator, who blesses us with this world, these bodies, and our fellow creatures, all created good, very good. Amen. (Source)
Posted by Rev. Dr. Valori Mulvey Sherer at 7:46 AM