I commend to you a non-profit group called StoryCorps whose mission is to build connections between people by sharing real-life stories. Most of the stories are about ordinary people doing ordinary things: a grandmother telling her grandchildren about falling in love with their grandfather; one friend telling another what their friendship means to them. 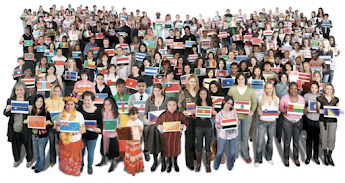 StoryCorps has produced several books of these stories. One of them is called, “Listening is an Act of Love” and, as they say on their website: “Everybody’s story matters. Every life counts.”

We have a similar mission as Christian churches – to build connections among all people, languages, races, and nations within the shared story of our redemption until the whole world is reconciled to God in Christ. It is true for us too, that listening is an act of love – reciprocal love with God.

We believe that all creation has been spoken into being by Jesus through whom all things were made. He is the Word of God, the reason or plan of God eternally active in creation. At Jesus’ Baptism by John God said, “This is my beloved, listen to him.” (Lk 9:35) Listen to him… Hear and respond to him... 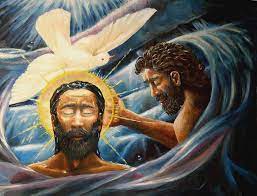 We feel like we do listen to him – or at least we try to. We try to obey Jesus’ command to us to love God, neighbor, and self. We try to obey the rules of our faith as we live our lives in the world. But when God said, “listen to him” at Jesus’ baptism, we weren’t being told to obey Jesus. We were being invited to respond with our “yes” to him, reciprocating his love for us with our love for him.

In today’s Old Testament story, King Ahaz (whose name means, “has held”) demonstrates what happens when we do not reciprocate God’s love. Ahaz is a faithful Jew and holds fast to the Jewish law in Deuteronomy, the one that says, “Do not put the Lord your God to the test” (6:6) so when God invites him to ask for a sign from God, Ahaz says “no, I can’t.”

God, however, is ready to do a new thing and be known in a new way. God is waiting to save the Jewish people besieged by war, but Ahaz can’t say “yes” to God because he has put his obedience to a rule ahead of God’s offer of comfort. For Ahaz, this encounter is outside his expectations for who God is, what God wants, and how God acts.

Seeing this, the prophet, Isaiah, clears things up, proclaiming that God is already acting to save the people and will give them a sign. Look, Isaiah says, a young woman is pregnant, and by the time her child grows up, the city and the nation of Jerusalem will have been saved from their enemies. This child will be named Immanuel, which means “God with us” because he will be the sign of God’s presence, a reminder of God’s promise of salvation.

The story of Ahaz stands in contrast to the story of Joseph, who in the gospel story today, listens with reciprocal love.

An angel appears to Joseph in a dream saying what angels always say: Don’t be afraid… God is acting in this moment. Your Mary is pregnant and the son within her is from the Holy Spirit. When he is born, you must name him Jesus, actually ‘Jehosua’ in Hebrew – Joshua - which means ‘God saves,’ for he will save his people from their sins.’

Both Matthew and Isaiah proclaim a God who knows what the people need and acts to redeem even before they ask for it. This is how God has always acted.

The prophecy in Isaiah was not about Jesus being born of Mary in Bethlehem. It was about God - who loves us, is always present with us, and is already acting to redeem even before we ask. 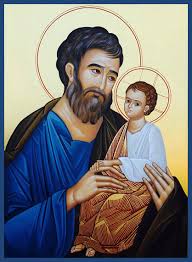 The story of Joseph’s “yes” to God offers us so much to talk about, but for now, the gift I want to focus on is what it cost Joseph to say “yes” to God.

Nobody around their village would know - or believe - that Mary came up pregnant by the Holy Spirit. They’d have done what folks usually do – put the pieces together in a way that makes sense to them. The obvious conclusion would be that someone besides Joseph got Mary pregnant.

According to the law, Joseph was supposed to have Mary stoned to death for adultery. His inclination, however, was to dissolve their marriage contract and “dismiss her quietly.” That would have spared Mary’s life, but it also would have destined her and her child to a lifetime of poverty, and shame.

When the angel asked Joseph to take the already pregnant Mary as his wife, Joseph knows saying “yes” to God means he will have to sacrifice his righteous reputation and live out his days as the pitiable man with the unfaithful wife.

Joseph could have said to himself, ‘God doesn’t speak to someone like me.’ Or he might have reasoned that God wouldn’t ask him to violate the very laws God gave his people to follow. He could have written off the whole thing as nothing more than a delusion. But he doesn’t.

When he awakens, Joseph gives his “yes” to God because he was righteous. Joseph was in right relationship with God. His conscience was pure, that is, aligned completely with the Word of God given to him. In our Collect today, we asked God to purify our conscience, to align us completely with the Word of God who dwells in us. The voice of God within us, individually and as a community, leads us forward in the way we are meant to go. It tells us what our divine purpose is and how to live it out.

St. Paul tells us that we have been prepared to do this, having received grace and apostleship from Jesus. We are by definition a gathering of apostles – a people sent on a mission. And what is our mission? To use everything we’ve been given, and risk everything we have, so that God can be made known, and God’s love made manifest in the world in new and unprecedented ways, until all people, languages, races, and nations are “restored to unity with God and one another in Christ.” (BCP, 855).

As we practice our last week of Advent together, I pray that we will listen faithfully and fearlessly to the voice of God within us and respond as Joseph did, with our “yes.” Amen.

Posted by Rev. Dr. Valori Mulvey Sherer at 7:00 AM