Epiphany, 2023-A: Thrilling moments of connection

I like today’s Collect, except for the part where it says, “we who now know you by faith” as if those who were in Jesus’ physical presence didn’t need faith to know him. That just isn’t so. Even Jesus’ closest disciples didn’t really know him as the Christ, the manifestation of the fullness of God on the earth, while they were with him. It took time and dreams and experience for them to get to that understanding. 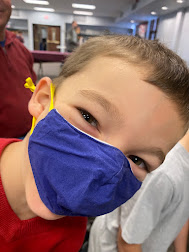 The same is true for us. Knowing God in Christ comes to us with exposure (bring the little ones to church), experience, and the still small voice that speaks in our bodies and dreams. Jesus is present for us in real and manifest ways every day. With experience, we begin to notice just how true that is.

Our forebears speak in the Old Testament of not being able to see the face of God and live. We have seen the face of God – Jesus – and we still see it, literally and mystically.

Once when I was on a spiritual retreat, I was prayer doodling - which is a familiar prayer discipline for those who joined us at our recent Christian formation gathering on this topic. The image of the yoni came to my mind. The yoni is an ancient symbol for the divine womb, the procreative energy of God. Incidentally, this symbol is on all of our bishop’s seals and many diocesan logos. Isn’t that a beautiful notion?

Anyway, I was prayer doodling the yoni symbol using watercolors, with no real intention for the image. When I hung the paper up to dry and stepped back a little, I saw a bearded face which I recognized in my heart as Jesus. I was startled by the revelation. My heart was thrilled, as the psalmist says, and I laughed like Sarah as I praised God for this manifestation.

The manifestation of God to us is almost always like that – a surprise that thrills the heart. This is what Matthew describes in his telling of the Epiphany story. Upon seeing the child, Jesus, the visiting magi were overwhelmed with joy. In response, they paid him homage and offered him expensive gifts. Their hearts were thrilled by the manifestation of God they saw in Jesus – and they were Gentiles who had no expectation of the coming of a Messiah to save them. 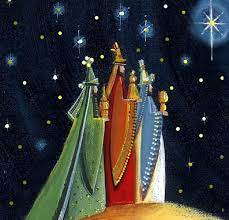 Following their own tradition, these magi noticed an unusual star at its rising, signifying that an important person, a king, had been born. This is a reference to the ancient Eastern understanding of a king who was often called the son of God due to their importance. Some even thought that kings were gods or at least demigods.

So, these magi (however many there were – and it wasn’t three of them) followed the star, stopping in Jerusalem to ask for directions. Hearing about this Herod called the chief priests of the temple and the scribes to ask where this child could be found and they told him Bethlehem, according to the prophecy – which also said this child would be the ruler of the people, the shepherd – another word for king.

This sent Herod into violent paranoia again, which apparently happened a lot with him. Herod lied to the magi, asking them to return to him once they found the child so he could pay homage too. They didn’t. God spoke to the magi in a dream and told them not to return to Herod, so they went home by another road.

This, I think, is the crux of the story of the Epiphany. As one commentator said: Epiphany is “a celebration of the breaking down of dividing walls––the end of hostilities between groups of people (Eph 2:14). Epiphany challenges us to reconsider all the people whom we see as outside the pale––outside the boundaries of God's love. It challenges us to abandon our tribalism (racially, nationally, denominationally, etc.) and to expand our tents to welcome even those whom we would prefer not to love. It is a burning issue, because loving those outside our tribe is difficult––but Christ makes it possible. That is the Epiphany message.” (Dick Donovan) 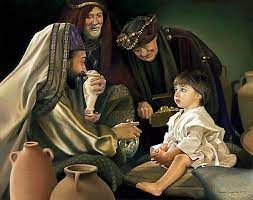 The magi were outside the pale in those days. They were thought of as sorcerers who worked magic usingdemonic power and they would have been treated with suspicion, even contempt, by faithful Jews. Yet God tapped them on their spiritual shoulders and using their own traditional and spiritual understanding, sent them to find the Christ-child.When they found him, their hearts were thrilled and they, like the shepherds in the fields before them,were overwhelmed with joy… for such is the lavish love of God, who brings down every boundary that limits inclusion in God’s love.

I want to point out that the magi did not get converted. They didn’t become Jewish proselytes, or get baptized, or change their religion. And God had no problem meeting them where they were, utilizing their religious understanding to connect with them and lead them to love.

How did they know Jesus? Was their understanding of this child-king like that of the Jewish people of the time? Is ours?

It is in this way: we all know Jesus as the manifest love of God who was, and is, and always will be. The magi’s encounter with Jesus was an experience of the love of God which thrilled their hearts and caused them to rejoice. There were no strings attached to their inclusion in Love, just as there are none for us today. 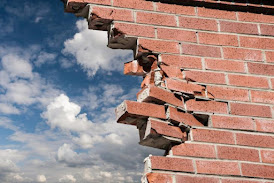 Any barriers we humans put up crumble in the face of the love of God in Jesus, and sadly, we still put up barriers. If you need help identifying them, just watch the news for a few minutes – you can’t miss them.

The first recorded smashing of a boundary in our Christian narrative was the one between Jews and Gentiles as St. Paul points out in his letter to the Ephesians: “…the Gentiles have become fellow heirs, members of the same body, and sharers in the promise in Christ Jesus through the gospel.” This was the start of a reconciliation cascade which is ongoing today.

Like Paul, we are also servants according to the gift of God's grace that was given us, and we are called to bring the good news of the boundless riches of Christ to anyone and everyone on the other side of one of our barriers. We are called to abandon our tribalism and expand our tents to welcome even those whom we have a habit or justification to exclude. 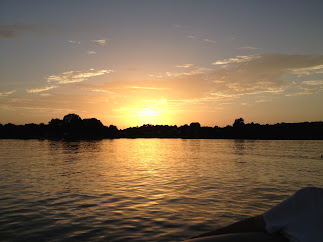 Each time the love of God is made manifest in our world, we are all in the presence of Jesus. Think of the many ways that happens: when a child smiles at us melting our hearts; when someone offers us an unexpected kindness; when a hymn or anthem lifts us to heaven; or when a sunset works us over like a work of art as Dar Williams says.

I’m willing to bet that we’ve all had moments that thrill our hearts and overwhelm us with joy. Honestly, one would be enough for a lifetime, but the love of God for us is so lavish that we get these thrilling moments of connection often, continually.

All we need to do is learn to notice them and let them change us from glory to glory. Amen.

Posted by Rev. Dr. Valori Mulvey Sherer at 7:30 AM