Note: If the above player doesn't work on your device, click HERE for an.mp3 audio format.

There’s a tiredness known now as “COVID-fatigue” which is, in part, why we’re seeing so many people going out without masks, ignoring social distancing, and taking risks that make no sense as the pandemic resurges among us. I’m hearing people say things like: ‘I don’t care if I get it or not,’ or ‘I’m willing to take the risk,’ or ‘some people are going to get it and some won’t, that’s just the way it is now.’

COVID-fatigue also shows up as irritability over little things as couples and families isolating together can attest. And there’s a growing fatalism taking hold: ‘why am I bothering? The numbers just keep going up. There’s nothing I can do about it anyway.’ 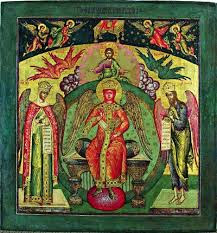 Part of the fatigue derives from a feeling of helplessness. The answer to the problem still evades us. There’s no vaccine to stop it and no magic medicine to treat it.

What if this were to go on for centuries?

If that were to happen, then white people might have some sense of what black people in America have been experiencing. This is our moment of awakening to how it feels to have our lives and freedoms restricted with no clear solution to the problem, and no end in sight.

I expect the same kind of fatigue will soon start showing up in complaints from people who are tired of hearing about racism, but until every one of God’s children of color is treated with the respect, dignity, and advantage God’s white children enjoy, the discussion and justice-making work must go on.

Thankfully, our Collect today offers us the motivation to keep on working for justice and wholeness even though we’re tired. As our Collect demonstrates, ours is a trinitarian relationship of God, other, and self, moving as one in a divine dance, the individual parts in unity with one another. Three moving as one. If any one of us falls out of step or leaves the dance, the whole is affected.

It’s like a mobile that you see over a baby’s crib. The ornaments rotate slowly in a peaceful, circular dance, but if one of the ornaments is cut off the whole mobile tilts out of balance and soon, it can’t rotate anymore.

In the same way, no matter how tired we are, it isn’t just about us. We are part of something bigger than ourselves. Everyone else in God’s creation is part of us. Therefore, what we do or don’t do affects the whole of us.

So, we wear masks and practice social distancing, not just for ourselves but for those among us who are at risk of harm from the coronavirus. And we stand with and listen to people of color who are crying out with pain from of the effect of generations of racist policies that have restricted their lives and freedoms.

Even now, there are counter-voices claiming that the coronavirus isn’t a real thing but a political ploy. This is nothing more than intentional ignorance.

Then there are the voices that claim we are in a post-racial society, we had a black president after all, they say. They deny racism exists anymore except when it can be abused by people of color who “play the race-card” to get what they want without earning it. This kind of gaslighting has led to all kinds of passive-aggression in response to real injustice.

It may help to know that intentional ignorance, gaslighting, and passive aggression in response to injustice isn’t new. Jesus confronted the same thing in his time, and it frustrated him too as we heard in today’s Gospel from Matthew.

The setting is this: John the Baptist is in prison. Jesus, who had been a follower of John, is out on his own now preaching. When John hears that Jesus is out preaching, he sends some of his followers to ask Jesus if he is the Messiah they have been awaiting. Jesus tells them to tell John what they see and hear: the blind see, the lame walk, the lepers are cleansed, the dead are raised, and the poor have good news brought to them.

This is where today’s lectionary picks up. The greatest prophet ever is in prison and Jesus knows where all of this is leading - for John, for himself, and for God’s people - and he’s frustrated.

You’re acting like a bunch of children, he says. The children of Group A say to the children of Group B: we celebrated a wedding and you wouldn’t come dance with us. Yeah, says Group B to Group A, well we held a funeral and you wouldn’t mourn with us.” This doesn’t sound like much to us, but it was a huge violation of the hospitality law for them and it would have been a great disruption to their community.

For us it sounds more like this: We sang our anthem at the football game and you wouldn’t stand and sing with us! Yeah, well we keep mourning murdered black bodies and you just look away and complain about protestors.

There’s no satisfying people who are so polarized, and Jesus uses John and himself as an example: John is called demonic for not eating or drinking while I’m called a glutton and drunkard for eating and drinking.

“Yet” he says, “wisdom is vindicated by her deeds.” Jesus’ choice of the word “wisdom” alerts his hearers to a powerful biblical concept found in Joshua, Solomon, Job, the judges, Proverbs, and the whole wisdom tradition.

As the religious and cultural authorities respond with violence to those like John who call for change in the way the community lives together, wisdom, the justice-maker of God, is vindicated by her deeds: the blind see, the lame walk, the lepers are cleansed, the dead are raised, and the poor have good news brought to them.

Yet, the people refuse to see or acknowledge the divine call for change. They refuse to dance in unity with one another and with God, choosing instead to fight and complain about those other people, deepening the divide between them.

Then our lectionary jumps a few verses - skipping over Jesus skewering his own people. Jesus compares them to the famously wicked towns of Tyre and Sidon. We’re not wicked. We’re not like them! Today it might sound like this: “We’re not racist. We’re not like those slave-traders and plantation owners.”

Jesus hurt some feelings speaking a truth they didn’t want to hear, so he offers a public prayer: “I thank you, Father, Lord of heaven and earth, because you have hidden these things from the wise and the intelligent and have revealed them to infants...” Awakening to truth is hard for those who think they already know it, but it is God’s will that we do, and that we open ourselves to learn as infants do - continually and innocently. This isn’t about blame, it’s about justice.

But it all feels so hard, so heavy… and we’re already tired. So, Jesus restores us to the divine dance, reminding us that we don’t do this alone. We do this as we do everything, with God and one another.

Jesus’ next words of comfort are some of my very favorite, which is why I use them so often at the offertory sentence (in Spanish and English): “Come to me, all you that are weary and are carrying heavy burdens, and I will give you rest…”

This isn’t Jesus telling us to stop carrying our burdens, just to stop trying to carry them alone. Jesus offers to yoke himself to us to bear our burdens with us and to guide us on the path we must go to establish real, lasting justice.

COVID-fatigue has just begun for some of us. Racism-fatigue is centuries long for others of us. We are all tired, but we are motivated to change the way we live in community together even knowing there will be no magic medicine to make this quick and painless.

The only way to get through the long-term changes that will be required of us is to go together, in a divine dance of unity with one another and with God, humbly, gently, innocently, and for as long as it takes.

Our way will be made successful. God promises it - and God always keeps God’s promises.