4 Pentecost, 20-A: Nothing short of everything

I love the story from Genesis that we’re given to contemplate today. I love it because it challenges our comfortable definitions of God, ourselves as believers, and what God wants from relationship with us.

I love it because it marks the beginning of a very long journey for God’s people, led by Abraham at first, a journey that would take too long yet would eventually lead them to the promised land. Before this journey could begin, however, God needed Abraham to know that he could do what God was going to ask of him. The test wasn’t to prove anything to God, but to Abraham. 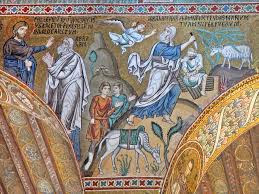 The story of Abraham’s sacrifice of Isaac seems like a divine game of chicken. How close will God let Abraham get to killing his own son, the son God had promised but not delivered until he and his wife were elderly, the son God said would generate a nation of people for God? What kind of God would play such a monstrous game?

And why didn’t Abraham plead with God for Isaac’s life as he had just recently done for the people of Sodom? Why did he just comply with so terrible a command from God?

2) By the time God made this request of Abraham, their relationship had grown and deepened to a point that Abraham had profound trust in the goodness of God, enabling him to walk to the edge of that nightmare cliff, ready to jump. Abraham knew that God’s plan of salvation for him and for all people was beyond his imagining and sure to be fulfilled so there was nothing that could disrupt Abraham’s trust in God, not even what seemed like a monstrous demand for his son’s life.

3) Abraham was ready to offer whatever was required of him as a participant in God’s plan of salvation. He was willing to do only his part, then hand off the journey into other hands God had made ready to carry it. In short, he was willing to die to himself that others might have life in God.

What God wanted from relationship with Abraham was nothing short of everything; and Abraham was ready to give it. That’s what he needed to know about himself in order to serve God and God’s people.

In the context of our present time and our uncertainty about how to make real, lasting changes in the systems that oppress our African-American sisters and brothers and all people of color, we hear from this story what will be required of us: and it’s nothing short of everything.

God tested white Christians in America and said to us, “white Christians in America!” And we said, “Here we are.” God said, “Take your economic systems, your governmental systems, and your institutional church systems, take these systems you made for the future for your children, whom you love, and bring them to a place I will show you, a place where you will "recognize the truth." (Source) In that place, offer all of those things you love to me as a burnt offering.”

So white Christians in America rose early the next morning, saddled with sadness, and packed what we needed to make the sacrifice: the partial histories we wrote and the whole histories we silenced, the money we bent our knees to, the politicians we bent to our will then blamed, and the churches we constructed to make it all okay.

And white Christians in America went, with a small community of global friends, to the place in the far-off time that God would show us. We traveled for three days, a short but arduous journey. Three days, the same amount of time Jesus spent in the tomb.

On the third day white Christians in America looked up and saw the place of the far-off time. It had erupted before our eyes awakening our souls with a start. We suddenly knew that the far-off time is now. We had seen it coming. Our forefathers and mothers knew they could only start it and we’d have to finish it. And the time is now.

Then white Christians in America said to their global friends, “Stay here; we need to go over there to the place of the once-far-off-but-now-present-time; we will worship, and then we will come back to you.”
When they came to the place that God had shown them, white Christians in America built an altar there and made ready to sacrifice their future on it, placing on the altar the preparations for the burnt offering: the partial histories we wrote and the whole histories we silenced, the money we bent our knees to, the politicians we bent to our will then blamed, and the churches we constructed to make it all okay.

Then they bound up their future and laid it upon the altar, on top of the preparations. Then white Christians in America reached out their hands to burn their future.

Then a voice said, “Do not kill your future. Sacrifice only your alternative to my plan. Place your will, your plans on the systems you built, and sacrifice that to me.

For now I know that you truly love me, since you have not withheld that which you love from me.” And White Christians in America looked up and recognized the truth: we do love God and we can trust in God completely.

We recognized the truth that the Lord has always provided and will always provide. That God’s plan of salvation for us and for all people is beyond our imagining and sure to be fulfilled so there is nothing that can disrupt our trust in God.

We recognized the truth that the preparations we were ready to sacrifice - the partial histories we wrote and the whole histories we silenced, the money we bent our knees to, the politicians we bent to our will then blamed, and the churches we constructed to make it all okay - were nothing more than the wages of death; the bonds of a lie that overtly denied others the freedom to live and covertly stole ours too. Burning those would be our freedom.

We recognized the truth that we have been chosen by God to establish a new future, God’s future - that leads people of every race, gender, nation, and language, along with all of our children, and our children’s children, to participate in God’s plan of salvation.

We recognized the same truth that Abraham did: we can do this. We can be willing to die to ourselves that others might have life because we trust God’s goodness completely - for us and for all.

It was a short journey to that place of the once-far-off-but-now-present-time, but it will be a long exile from our familiar ways until we reach the promised land, but we will reach it. God has promised it.

In this present moment, God’s children of color are dying, babies of color are locked in cages while their parents grieve their empty arms, and the privileged class is drowning in selfishness. The questions re-echo: what do we do? How long will we suffer this perplexity in our minds and grief in our hearts?

The answer is: as long as it takes. Our forebears spent a long time building their world then leaving it behind for exile in the wilderness, where they felt lost and abandoned, hungry, and missing what they left behind.ut on they went following God’s guidance until finally - they reached the promised land, generations later.

We will recognize the promised land when everyone on earth is so joined together with the apostles and all the company of heaven, in unity of spirit, that we are made one, holy, diverse, living dwelling place of God.

And it will require from us what was required of our Father Abraham: nothing short of everything.

Posted by Rev. Dr. Valori Mulvey Sherer at 5:00 AM